The 15 December Holiday Luncheon featured President Gary Brock thanking the outgoing 2009-2010 Board of Directors.  He called each member of the Board to the front, including: 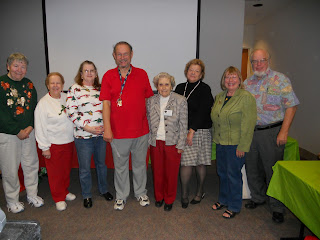 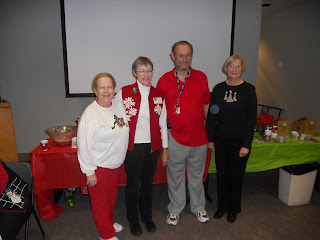 We had about 30 attendees at the annual CVGS Holiday Luncheon on Wednesday, 15 December at the Chula Vista South Branch Library.  We tried something new this year - we set up the food service in the smaller conference room, which gave us much more space in the larger room for seating and eating.  Because Susi has been ill and was going out of town, Virginia managed the food presentation very well with the help of several other members.  The ham and turkey were purchased, and attendees brought potluck dishes for salads, rolls, entree accompaniments and desserts.

President Gary Brock welcomed everybody, and made sure that everyone had a door prize ticket and a gift exchange ticket if they brought a gift to exchange.  We had a moment of silence for the CVGS members, emergency first responders and members of the Armed Forces who have lost their lives in 2010.  Then it was time to eat, and everybody filled their plates and enjoyed the meal, and the table conversation with their colleagues.

Gary started the formal program by showing a 15-minute slide show "Out of the Past" with photographs of CVGS meetings and luncheons since 2005.  The 2009-2010 officers and committee chairs were then introduced and thanked, and pictures were taken for posterity.

Past President Randy Seaver then officiated at the 2011-2012 Officer Installation, reading the duties of each Officer and then swearing in the elected person to the Office.  There were more pictures of the newly sworn-in Officers - Gary Brock (President), Virginia Taylor (First VP-Programs), Bobbie Lane (Second VP - Membership) and Mary Lou Montez (Secretary).  The newly elected Treasurer, Jaye Wright, was not available, and will be sworn in at an early 2011 society meeting.

President Gary Brock presented an "Into the Future" message that encouraged the members to support their Officers and board, to be aware of the challenges that CVGS faces, and to be accepting of changes to society meeting schedules.

Finally, there was the wrapped gift exchange, the Door Prize (a large handmade Santa Angel donated by Bernice Heiter) drawing and the Opportunity drawing for the poinsettia table decorations.

A wonderful time was had by all in attendance, and was a fun and enjoyable start of the Holiday Season.
Posted by Randy at 11:19 AM No comments:

CVGS Holiday Luncheon is on 15 December


The event will feature a slide show on the theme of “Out of the Past and Into the Future.” There will be an Officer Installation with past society Presidents doing the honors.
The luncheon will have turkey, ham, and drinks provided by CVGS. The pot luck breakdown for the rest of the meal will be (for last names starting with):
Please call Susi Pentico (619-623-5250, or susicp) to coordinate potluck dishes.@cox.net

Members are requested to bring canned food and/or unwrapped toys for donation to the Salvation Army.

A gift exchange will be held (maximum value $10): bring a wrapped gift in order to draw one.

For the Door prize: everyone gets a free ticket to win a Santa or an Angel.

Meat leftovers will be auctioned off to the highest bidders.
Posted by Randy at 11:48 AM No comments:

We had nine eager genealogists at our 8 December meeting of the CVGS Research Group.  Randy encouraged attendees to sign up quickly for the Holiday Luncheon on 15 December, and passed around the latest copy o.f Family Tree Magazine, the American Ancestors magazine, and the book If This Land Could Talk.

*  Ann described her two week vacation to Germany to visit her son, and her genealogy trip to Luxembourg, where her great-great-grandfather was born in Medernach.  She had visited in 1982, but did not take pictures of the family gravestones found in the cemetery.  Those markers are apparently long gone, since they recycle burial plots in parts of Europe.  There were stones for her family names, but they were not older stones.  She went to the local record office, and left family group sheets there.  After she returned, the office wrote a letter to her, and provided some birth and death records of her family members from the early 1800s.  The group suggested that Ann look in the FamilySearch Library Catalog for available microfilmed records, and to check the Luxembourg message boards to try to find cousins and determine what other records might be available in Luxembourg.

*  Myrna's Christmas gifts came early - two books on her Born family written by her mother's cousin, a family historian, that Myrna contributed to with photos and family information.  Volume 1 covered the families of the immigrants from Todenhausen in Germany after 1850 to northern Ohio, up to 1940.  The second volume covered the next generations, from 1933, and contains much information about living family members.  Myrna will place Volume 1 in a number of libraries, but Volume 2 will be held by family members only.  Myrna found this cousin on Facebook, and will visit the author on her next trip to Ohio.

*  Shirley is reviewing the sources in her database, and is editing place names so that the correct historical place name is used at the time of the events.

*  Virginia's shared the family book made by her husband's aunt using the MyHeritage web site, and sent it to Virginia's daughters.  The book included pedigree charts, vital information, notes, descendants charts and other information.

*  Kevin's great-great-grandfather was named John Brown, who lived in the San Francisco Bay area between 1880 and 1905, and then disappeared.  He knows the year he was naturalized, and wanted to know how to obtain the naturalization record.  The group noted that the National Archives would have any federal court records, but county courts might have them also.  The group said that Kevin should check city directories, voters registrations, newspapers and California death records to obtain more information.

*  Ruth talked about the Chula Vista centennial celebration in 2011, and the part CVGS members could play.  She said her 2011 resolutions were to manage her genealogy research better, and to have fun with genealogy and the centennial events.

*  Randy bought a new computer with Windows 7, described his travails with email archives, using PhotoScape for photo management, using the FAN Club to track down elusive ancestors, and some details of his weekend visit to Julian historical museum, cemetery and library.

The next Research Group meeting will be on Wednesday, 12 January, at 12 noon in the Chula Vista Civic Center Branch Library Conference Room.
Posted by Randy at 11:22 AM No comments:

CVGS Newsletter for December 2010 is online

The Chula Vista Genealogical Society Newsletter for December 2010 is available for reading at http://www.rootsweb.ancestry.com/~cacvgs2/Newsletters/10_12dec.pdf

Saturday Workshop on 4 December is about Charts and Forms

The December 4th Saturday workshop program is at 12 noon at the Bonita Library (4375 Bonita Road in Bonita) in the Conference Room.

This session is titled "Research Charts That Help Organize Your Information" and will be hosted by Susi Pentico, the CVGS Education Chair.

The Seminar Committee found and liked the looks of some of the forms that interrelate to each other in researching and documenting your genealogy. The forms being presented will be: Research Calendar, Research Journal/Log, Research Checklist and Research Questions.


They will show how they ‘help a researcher locate past data that may be filed in a notebook that could/should be filed in a specific way, for ease of access.” The purpose of this workshop is to encourage attendees to use these charts in order to expand their chart knowledge and research organization.
Posted by Randy at 9:35 AM No comments: