The November Chula Vista Genealogical Society workshop is on Saturday, 2 November from 12 noon to 3 p.m. at the Bonita-Sunnyside Library (4375 Bonita Road in Bonita, California, turn north on Billy Casper Way and then the library is on the left).

Susi Pentico will lead a discussion on "Polish Genealogy."
Posted by Randy at 10:45 AM No comments:

Jim Wells presented "Queen Victoria and the Royal Houses of Europe" at the Chula Vista Genealogical Society meeting on 23 October 2013 at the Chula Vista Civic Center Branch Library.  Jim is a numismatist and a historian, and it is a fascinating combination.

In his presentation, Jim outlined the ancestry and descendants of Queen Victoria (1819-1901), who reigned over Great Britain from 1838 to 1901 - 63 years.  Victoria was in the Hanover line of British monarchs that started with George I in the early 1700s.  In 1840, she married Albert of Saxe-Coburg & Gotha (1819-1861), one of her first cousins, and they had nine children and 40 grandchildren.  One of her sons, Edward VII, became King of Great Britain after her death.  The current monarch, Queen Elizabeth II, is one of Victoria's second great-granddaughters.

The other eight of Victoria's children married and had children, and many of them were part of Europe's royal families.  During the presentation, Jim showed the marriages, the children, and the royal lines that resulted by intermarriage with other European families in Denmark, Norway, Sweden, Germany, Greece, Russia, Romania, Spain and Yugoslavia.  Several of the families resulted from intermarriage between cousins descended from Queen Victoria.  From the beautifully done charts, the attendees received a great lesson in how all of the royal families of Europe are related.  For each family, he also showed the coinage that depicted the royal families, right down to the commemorative coin released on 23 October for George, the new son of William and Kate (one of Victoria's 5th great-grandson).

In all, 33 of Queen Victoria's descendants have ruled as monarchs, and five are currently ruling European countries now.

This was a fascinating presentation and everyone attending learned about the royal houses of Europe.

Jim Wells on “Queen Victoria and the Royal Houses of Europe”

Queen Victoria occupied the throne of the United Kingdom for over 63 years, longer than any other sovereign. Through her children and their offspring, she also managed to spread her family among a dozen European royal houses. Her great-great-grandchildren now sit on the thrones of five European kingdoms. Her descendants also were the last sovereigns of five other kingdoms and two German duchies. These monarchies, empires, and duchies often engrave the heads of their rulers and sometimes other family members on the coins of their countries. So Victoria's family tree is filled with European coins, not only shillings, but also marks, kroner, drachma, pesetas, rubles, and now euros. Studying the coins in her "tree" leads to some fascinating personalities and European history stories. 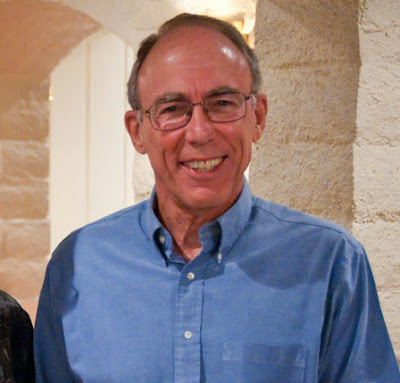 Jim Wells is a retired software engineering manager who has been a coin collector for most of his life. He enjoys researching and collecting coins of America, and of European royal houses, and has exhibited and written about the descendants and coins of Queen Victoria, King Christian IX of Denmark, and William the Conqueror. His coin exhibits in local, state, and national conventions have won several Best of Show and People's Choice awards. He published a five-part series on Queen Victoria coins in the World Coin News monthly newspaper, and has written many articles for other numismatic publications. He was recently named "Speaker of the Year for 2012" by the Numismatic Association of Southern California.

The October meeting of the Chula Vista Genealogical Society (CVGS) Research Group was on Wednesday, 9 October at the Chula Vista Civic Center Branch Library.  There were 14 in attendance.

In the first hour, there were announcements about the SDGS bus trip to the Los Angeles Public Library on Saturday, 2 November; the SDGS Seminar in January featuring Lisa Louise Cooke; and the CVGS Field Trips scheduled to the FamilySearch Center on 30 October and in January, and to Carlsbad Library in November.  Randy showed some photos from his Legacy Family Tree 2013 Cruise through the Panama Canal, and discussed the Ancestry acquisition of Find A Grave, the release of and update to Family Tree Maker 2014, and the improved Ethnicity Estimate in AncestryDNA's autosomal test results.  Karen visited the new San Diego Central Library and provided some pointers for what to expect getting there and accessing records there.  She will write a newsletter article about her experiences.

In the second hour, we went around the table to share research problems and successes, including:

*  Karen found a 1985 book on Sketches of the Maryland Eastern Shore at the San Diego library, and found information about her LeCompte ancestors.

*  Berdella and John reviewed their trip to Ohio and Maryland researching her father's genealogy.  They found lots of information at the Frederick, Maryland library and courthouse, and found an 1840 map showing land owners.

*  Dawn found her ancestors' marriage record in 1827 in Washington County, Tennessee marriages, which had her grandfather's surname and her own middle name as the wife's maiden name.

*  Arline found her 3rd great-grandmother, Rozella Salmon on Find A Grave in the Salmon-Tway Cemetery in Fayette County, Ohio.  There were lots of family members and relatives in that cemetery!  Several of the contributor comments were her cousins and should be contacted.

*  Virginia had another new contact through a MyHeritage tree - a woman in Los Angeles shares Virginia's grandfather but is two generations younger.  She also found a more distant cousin in a FamilyTreeDNA match.

*  Helen's brother did a Y-DNA test on FamilyTreeDNA and is related to the Dill family in Maryland.

*  Gary found new information on his Philip Roff while using the Ancestry suggested records feature - in an online Albany N.Y. militia book.  He also showed how to use Google Earth to find Wanda's family land in Wisconsin.

*  Susi was contacted by two more Jones cousins, and she and Mary are looking for John Pentico's father in central Pennsylvania.

*  Shirley had a Wright (in New York) contact through her online tree who is related by marriage.  She also found her ancestor Daniel Miller in an 1869 directory for Oneida County, N.Y., but her is not in the 1870 U.S. Census.

*  Bethel found evidence of an ancestor marriage on a USGenWeb County page, but the date conflicts with other available evidence and family trees.

The next CVGS Research Group meeting will be on Wednesday, 13 November at 12 noon in the Chulas Vista Civic Center Branch Library (365 F Street) in the Conference Room.
Posted by Randy at 12:20 PM No comments:

The Computer Group has expanded in order to accommodate two more hours of instruction and usage. At 10:30 a.m., there is a one-hour class in the Library Computer Lab on “Basic Windows Computer Usage” with Gary Brock.   Bring your laptops in order to practice.

After a break for lunch (bring your own, or go out), the group will reconvene at about 12:30 p.m. in the Computer Lab for Internet work, led by Shirley Becker. This meeting features hands-on use of the library's Windows computers, or your own laptop (but the library wi-fi doesn't work well in that room).

For more information, please contact Shirley (clanroots@cox.net) or Gary (gary@brocksystems.net).
Posted by Randy at 10:30 AM No comments:

CVGS Newsletter for October 2013 is Available

The October 2013 issue of the Chula Vista Genealogical Society (CVGS) Newsletter was published last week.  You can read it online, in a PDF format - use the Newsletter link at www.CVGenealogy.org. 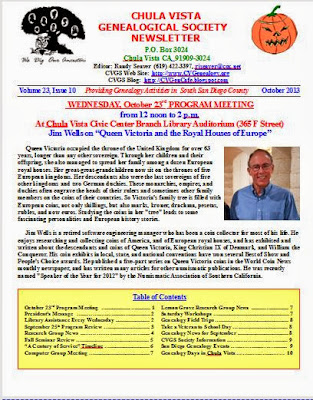 The October 12th Workshop at Bonita-Sunnyside Library (375 Bonita Road)) will be from 12:30 p.m. to 3 p.m. in the Community Room. Susi Pentico will lead a discussion about “Mennonite and Quaker Research.”
Posted by Randy at 10:23 AM No comments:

John Finch has arranged for three field trips in the coming months.  Here are the details:

In all instances, we shall meet, 9:30 a.m. at the downtown Chula Vista parking structure, 2nd level,  off F Street/3rd Ave. near Marie Callender’s.  for car pooling.  Please  contact John Finch at jan27@cox.net for further information and to confirm your attendance.

Do you have some old family photos and can only guess at their dates? This month’s topic was designed for you. Our speaker for the September 25th CVGS General Meeting was Claire Santos-Daigle, who has been professionally digitally restoring old photos for 12 years (see her website at http://www.photosmadeperfect.com/). In addition to bringing new life to damaged photo heirlooms, she can help you identify the approximate date of your picture – or teach you to do it yourself. For her presentation, Claire came attired in an 1888 taffeta gown complete with bustle and charming feathered hat. In fact, all of her accoutrements were authentic, down to her jewelry, chemise and pantaloons. 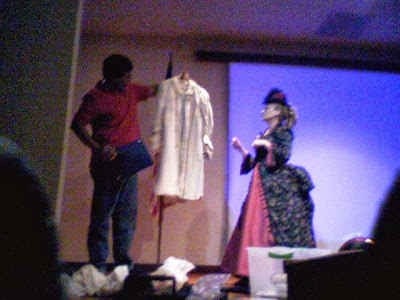 Claire began with tips on identifying our photos ourselves: create a fashion dating file and worksheet, record what you know about the item, analyze and note the details and compare them to other photographs, research objects in the photo (hairstyles, jewelry and props), and find and record a minimum of 3 sources agreeing on the same fashion era. Maintain this file for future research. On the right side of her website, Claire has a “Genealogy Corner” with additional information.

Drawing on her extensive private collection of vintage photographs, Claire presented a fascinating talk on how to identify the dates of your family photos by knowing what styles were popular in which decades. Beginning with the different types of photographs – daguerreotype, ambrotype and tintype – she explained the differences and time periods for each. Then, she showed examples of period dress: the shape of the bodice and sleeves, the width of the pleats, lace mitts, hoop skirts, and the evolution from bonnets to hats. She also showed various hairstyles and foreign influences on fashion. She didn’t omit men’s fashions, either: the width and notching of the lapels, the narrowing gap of collars, and the evolution of hats from melon to bowler to top hats.


Claire was so engaging and her presentation so informative and interesting, everyone convinced her to continue well past the usual allotted time. Fashion, after all, is an important indicator of how we want to be perceived, as our ancestors knew.
Posted by Randy at 10:03 AM No comments:

**  Wednesdays, 2, 9, 16, and 23 October, 10 a.m. to 12 noon., Chula Vista Civic Center Branch Library (365 F Street) -- Research Assistance in the Family Research area.  John Finch will help you with your research problems.  Bring your laptop if you want to do online research.

We welcome guests and visitors to our CVGS programs and events - if you are in the greater San Diego area and want to attend our events - please come and introduce yourselves.  All CVGS events are FREE to attend, except for some seminars and picnics.