Part 2 of Ceasar Castro's presentation on "California and the Mexican-American War From a Genealogical Point of View" was attended by 30 CVGS members and guests on Wednesday, 24 September at the Chula Vista Civic Center Branch Library.

Ceasar noted that historians want to highlight leaders and events, but genealogists want to find information about individuals - not only the leaders, but the soldiers and residents also.
In this talk, Ceasar provided a detailed history timeline of the events that covered the second capture of Alta California in late 1846, the battles in Baja California, and the end of the war in California in mid-1848.

Kearny claimed command of California at the end of hostilities, and had a rivalry with Stockton.  Fremont was named Governor of California, but was succeeded by Kearny as Governor in Monterey on 1 March 1847.

In the mean time, other military units arrived overland and by sea to help in California, and were soon directed to the southern tip of Baja California, traveling by sea.  There were battles at San Jose del Cabo, La Paz and Mulege, with the Americans eventually subduing the Mexicans.  The Battle of Todos Santos ended the fighting on 30 March 1847.

The fighting in Mexico ended in early 1848, and the Treaty of Guadalupe-Hidalgo was signed in Queretaro on 2 April 1848.  The treaty made Texas, New Mexico, Arizona and California part of the United States, and Mexico received $15 million.  Mexican residents of the captured territories were free to remain or go to Mexico, their property rights and land grants were respected.  Some Baja California residents were granted transportation to Monterey and to make property claims in late 1848.

During this presentation, Ceasar highlighted the names of many of the members of the American forces who served in the different military units, and the Californios who fought with them.

Ceasart's handout was a general description of his two presentations, with a bibliography of published books and local places of historical interest.

New Books in the CVGS Collection

The Chula Vista Genealogical Society has over 1,800 titles in the book and periodical collection at the Chula Vista Civic Center Branch Library at 365 F Street in Chula Vista, California.

Thanks to the generosity of some of our members, and thanks to the Friends of the Library for looking out for us as genealogy books are donated to them, and thanks to our own Society for purchasing books in order to continually improve our collection, we have added several new books to our shelves. In case you are interested, you might want to take a look:

976.4004 ZES The Captured: A True Story of Abduction by Indians on the Texas Frontier, by
Scott Zesch

Ceasar Castro is a local boy. He graduated from Hilltop High School and San Diego State with a degree in Electrical Engineering.  He worked at the Navy R&D Laboratory on Point Loma for 36 years before retiring. 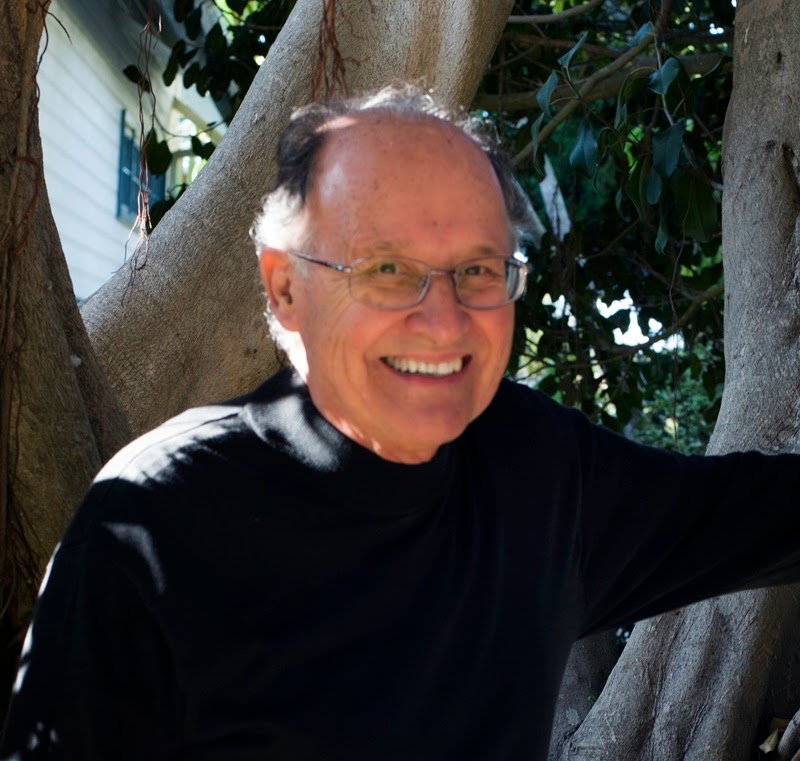 Ceasar started working on his genealogy in 2008 when his sister, who had started earlier, asked him for help. However, slowly he took over the research. He joined the San Diego Genealogy Society and the Chula Vista Genealogy Society to learn more about genealogy. All of his ancestors come from Baja California. In researching his Castro ancestors, he discovered that two of his great-grandaunts married Irishmen in Baja. This puzzled him - how did the Irishmen end up in Baja around 1850? This started him delving into the history of Baja and resulted in his research on the Mexican-American War.

When historians write about history, they are interested in who made decisions and the result of those decisions. If an army is involved, they may give the names of some of the officers but not of the common soldiers. They usually only give the number of soldiers. But we are  genealogists; we seek the names of all the soldiers. That is because we are usually looking for a particular person(s). This presentation on the Mexican-American War is from that perspective; what were the names of all the people involved in the Mexican-American War in California.

He described helping CVGS member Dorothy, who is going to Demanrk in late September, with her Danish genealogy research.  After writing a post on his blog, there were several helpful comments from readers and Facebook members, including offers for help from researchers in Denmark.  The blog post provided a list of websites to check for Denmark resources.

In the second hour, the research challenges, questions and successes were highlighted by some of the attendees, including:

*  Jean asked for help finding probate records of Nehemiah Tompkins, who died in Ontario County, N.Y. in 1836.  Randy showed to find this record in the New York Probate Records collection on FamilySearch, but there was no entry for him in the Probate record index.

*  Sally wanted help finding information for the ancestors of her husband's second great-grandfather, Julius Schaefer (1866-1968).  She had a 1966 Wichita, Kansas newspaper article celebrating his 100th birthday.  The article said his birthplace was Schramberg in West Germany.  The group suggested finding all possible records in the United States that might name his parents, such as a death certificate, the Social Security Application, a passenger list, and a naturalization record.  Then look for church records in Germany on FHL microfilms.

*  Diane found a family coat of arms and wondered what the difference was between a crest and a coat-of-arms.  Karen explained that the crest was part of the coat-of-arms.  A Wikipedia article was found to explain it.

*  Helen is still researching her Burleson family in Arkansas.  She found land records in Clark County, Arkansas in 1858.  A recently found correspondent has more records to share with Helen.

*  Sylvia's great-grandfather immigrated in 1857, resided in Fargo, N.D., and then moved to Tulare, Calif.  She found a naturalization record in Tulare, but it was not the declaration of intent.  She asked if there might be more records.  The group suggested checking the National Archives branch near Fargo to determine if one is available.

*  Ana asked if FamilySearch has removed record images from some of their collections.  The group noted that every collection has contractual obligations, and some contracts expire.  The removed images might be available on microfilm at the FamilySearch Library.

*  John was contacted by a lady in Spokane who had been adopted.  Due to a change in records access law for adoptees, she found out her birth mother's name, and found it in John's Ancestry Member Tree.  After she contacted him through Ancestry, John's response to her was "I'm her brother, and I've been waiting for your call for a long time."  John's family knew about the baby that his sister had as a teenager.  He has shared more family information and is looking forward to meeting his niece sometime soon.

The next Research Group meeting will be on Wednesday, 8 October at 12 noon in the Conference Room at the Chula Vista Civic Center Branch Library.

September 2014 Issue of the CVGS Newsletter is Available

The September 2014 issue of the Chula Vista Genealogical Society (CVGS) Newsletter was published this week.  You can read it online, in a PDF format - use the Newsletter link at www.CVGenealogy.org. 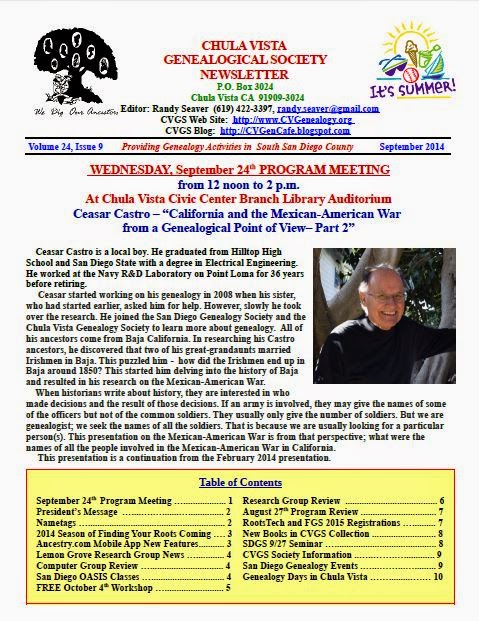 The September 6th CVGS Workshop will be from 12 noon to 3 p.m. in the Community Room at the Bonita-Sunnyside Library (4375 Bonita Road).

This workshop is intended for beginning genealogists who want to understand the basics of genealogical research.  The topics covered will include:

The forms will be provided to the attendees.

The Chula Vista Genealogical Society events for September 2014 include:

** Wednesday, 24 September, 12 noon to 2 p.m., Chula Vista Civic Center Branch Library (365 F Street) -- CVGS Program Meeting meets in the Auditorium.  The speaker will be Ceasar Castro on "California and the Mexican-American War, Part 2." Refreshments before and after the meeting.

**  Wednesdays, 3, 10, 17 and 24 September, 10 a.m. to 12 noon, Chula Vista Civic Center Branch Library (365 F Street) --Research Assistance in the Family Research area.  John Finch will help you with your research problems.  Bring your laptop if you want to do online research.

We welcome guests and visitors to our CVGS programs and events - if you are in the greater San Diego area and want to attend our events - please come and introduce yourselves.  All CVGS events are FREE to attend, except for some seminars and picnics.
Posted by Randy at 2:37 PM No comments: