Genealogy Days in Chula Vista in May 2012

Dr. Baird started his presentation with a list of the top ten causes of death in the USA in 1860, and compared them to 1900, 1970 and 1990.  Many of the earlier causes (tuberculosis, diarrhea, cholera, infantile convulsions, diphtheria, dysentery, scarlet fever) have been significantly reduced or eliminated by 1970, and replaced by heart disease, cancer, accidents/suicide, diabetes, arteriosclerosis and cirrhosis.

Next was a review of some of the Great Killers of the Past, with photographs of disease presentation in gruesome living color.  Treated were the Plague, Syphilis, Influenza, Tuberculosis, Smallpox, Cholera and Bubonic Plague.  He noted that Syphilis was transported from the Americas to Europe after 1492, but that Smallpox was transmitted the other way.  Steve also discussed the transmission of diseases between humans and animals.

As noted in his CV, Steve writes and sings songs about science.  He treated us to "Intelligent Design" accompanied by his guitar.  Steve's website is www.scientificgospel.com.

The last part of the presentation was a survey of the state of the art in genetics.  He discussed how genealogists can use the results of Y-chromosome, mitochondrial and autosomal DNA tests.  Lastly, Steve discussed the potential for curing diseases through genetic manipulation.  He recommended that concerned persons should talk to their doctors about genetic treatments.

This talk was both entertaining and fascinating because of the subject, and Dr. Baird's expertise and presentation skills (both oral and visual).  Steve's PowerPoint presentation was offered to attendees with a flash drive.


The April 25th Program meeting of the Chula Vista Genealogical Society will be held at the Chula Vista Civic Center Branch Library (365 F Street) in the Auditorium, starting at 12 Noon.

The program features Dr. Steven Baird on the subject of “Modern Terminology for Diseases and Causes of Death on Certificates.”

Dr. Baird will discuss some medical terminology and diseases lumped together in olden times that are differentiated today.  He will also explain a few diseases to which some ethnicities are predisposed.  There will be an emphasis on the health, politics and world history with regard to the 1918 Spanish Flu epidemic.  You will receive a handout of many diseases and their definitions (old and new) and most likely a song or two to illustrate his topic.

Dr. Stephen Baird graduated from Stanford University with a degree in Biology and Stanford University School of Medicine.  He is an Emeritus Professor of Clinical Pathology at UCSD School of Medicine.  He received the highly respected Distinguished Teaching Award from the University of California's San Diego Division of the Academic Senate, the UCSD Chancellor's Award for Excellence in Teaching, as well as three UCSD Medical School's Kaiser Teaching Awards.

Dr. Baird's research interests are in lymphomas and leukemias but he has also spent a good deal of time studying creation stories, Biblical and modern, as well as the genetics of human diseases and the genetic variations found in all modern human beings.  His interests in genealogy relate to how family trees could be used to study inheritance of various traits, both normal and disease processes.

Based on his love of music and science, he has written many scientific folk songs, now performed on CDs. His newest endeavor consists of 35 ballads written about his family's migration from Europe to America encompassing the years from William the Conqueror up to the present!  He has been known to sing his own compositions and play his guitar to illustrate the salient points of each lecture.

The meeting will include a short business meeting before the presentation.  Snacks and drinks will be provided before and after the meeting at the back of the Auditorium.

Our Trip to North Dakota - September 2011, by Bobbie Lane

My hubby, Dennis, has German-from-Russia ancestors, who lived in Volhynia, Ukraine. Some immigrated to the United States and lived in North Dakota beginning in the 1880s.

Last year we went to the Wells County Historical Museum in Fessenden for Dennis to finally meet a second cousin, once removed. They compared family notes for two hours, and I regret that we did not have a tape recorder with us. Dennis found his first photo of one set of his great grandparents, and the cousin gave him a 2011 book of plat maps and directory for Wells County. We also went to the German Baptist Cemetery, where Dennis found a great-great grandmother’s grave (1831 – 1914), but not her husband’s grave.

Our next stop was at the genealogy archives of North Dakota State University in Fargo. They were housed at the Institute for Regional Studies, located in the Skills and Technical Training Center just north of the main NDSU campus and the Fargo Dome. We spent a day there gathering about seventy copies of photos, plat maps, and historical data. The best find was the German Baptist Church Registry called “God Was There.”

Note:  CVGS solicited articles from the membership about Research Trips to put in a booklet displayed at the Escondido Family History Fair in March.  The authors of these articles are permitting them to be printed in the monthly Newsletters and on the Chula Vista Genealogy Cafe blog.
Posted by Randy at 10:29 AM No comments:

The April 2012 issue of the Chula Vista Genealogical Society Newsletter is available on the CVGS website - see http://www.rootsweb.ancestry.com/~cacvgs2/Newsletters/12_04apr.pdf.

The Chula Vista Genealogical Society Research Group meeting on Wednesday, 11 April was in the Computer Lab at the Chula Vista Civic Center Branch Library, so we took advantage of the 12 computer stations there.

Randy Seaver reviewed the available 1940 U.S. Census options on www.MyHeritage.com/1940census, on www.Ancestry.com/1940census/, on www.FamilySearch.org/1940census/ and on the NARA 1940census.archives.gov site.  He noted that the Ancestry site had the Steve Morse ED Finder tools available, and demonstrated their use.  His conclusion was that the Ancestry.com site was the easiest and fastest to use.  He noted that Ancestry has two states completely indexed, and that FamilySearch is in the process of indexing all states, but none are yet complete.  As an example, the 1940 U.S. Census for Susi's father was easily found once we identified the correct Wyoming county.

In the second hour, the attendees discussed their 1940 census successes and challenges.

*  Virginia found herself in Indiana, but her age was wrong.

*  Helen found her brother, but not her parents at the address where they lived.  She checked the whole ED and found her parents on Page 61 (the returns to enumerate those not at home previously).

In the last half hour, we discussed the successes and problems doing the research in general.

*  Gary transcribed and analyzed the Yates County NY Estate file for Timothy Roff, which named his siblings, nieces and nephews, including Solomon Roff, Gary's ancestor.  Solomon was named as a son of Phillip, and a marriage record of one of Solomon's sisters names her parents.  Phillip Roff's gravestone indicates that he is a Revolutionary War soldier who died in 1835, so there may be a Revolutionary War Pension File available.

*  Virginia was happy that a "shaky leaf" on Ancestry.com provided information for nine more generations in her Bland line, from Moses back to Adam, in a book.  Adam Bland was a minister in England who was burned at the stake by Queen Mary.

*  Ralph joined CVGS today.  He said he was just starting his research, enjoyed the Spring seminar and the Research Group, and looked forward to the other CVGS activities.

The next meeting of the CVGS Research Group will be on Wednesday, 9 May, at the Chula Vista Civic Center Branch Library (365 F Street in Chula Vista).  We will be meeting in the Conference Room on the East Hall.  Randy will demonstrate how to create Source Citations using RootsMagic source citation templates.
Posted by Randy at 10:16 AM No comments:

The Chula Vista Genealogical Society Spring Seminar on Saturday, 31 March was very informative and entertaining for the 100 attendees.  The Family roots Publishing book sale, the opportunity drawings, the door prizes and silent auction were highlights throughout the day.  An excellent served luncheon, plus morning and afternoon snacks, provided energy for the audience to enjoy the four presentations throughout the day. 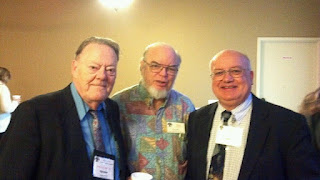 1)  The first presentation by Bill Dollarhide, a well-known author and conference presenter, was titled "British Migrations America, 1629-1775."  Bill framed his talk around the four main migration groups described in the book Albion's Seed by David Hackett Fischer.  There were two main parts to this talk:

*  A dissertation on the Kings and Queens of England and how the royal, civil, religious and social events in England influenced migration from England to America.  The disputes between the Catholic Church and the Church of England, the English civil War (1649-1660) were covered in significant detail.

After the delicious lunch, which included time to buy books from Family Roots Publishing and bid on the Silent Auction items, the program continued with:

3)  Bill Dollarhide's second presentation dealt with the Quakers and German Palatine Settlements (1675-1725) and the Scots-Irish Borderers (1717-1775) migrations.  The Quakers and German Palatines settled in the Delaware Valley (Pennsylvania and New Jersey) and had about 23,000 immigrants.  The Scots-Irish  settled west of the Fall Line Road east of the Appalachian Mountains, and had about 250,000 immigrants.

4)  Leland Meitzler's second presentation was "Newspaper Research in the 21st Century."  He described the history of American newspapers, with many visual examples.  He noted that three developments changed newspaper production and distribution - the invention of the power printing press, the railroads expansion to the West, and the increasing demand for news resulting from increased literacy.  Leland listed items to look for articles and notices about family members for birth, marriage, death, anniversary, insurance firms, etc. events.

All in all, this was an excellent day-long seminar by two well-known and dynamic presenters on subjects of interest to American researchers.  Many attendees took advantage of the books offered by Leland's company.
Posted by Randy at 11:43 AM 1 comment:

** Thursday, 26 April, 10 a.m. to 12 noon, Norman Park Center (270 F Street) -- Presentation in Room 9:  "Who Is In Your Family Tree?" by Randy Seaver, John Finch, Ann Stevens and Janice Nevills.  This is targeted for persons interested in starting genealogical and family history research.
The Chula Vista Civic Center Branch Library is located at 365 "F" Street in Chula Vista - between Third Avenue and Fourth Avenue, midway between I-5 and I-805 (take the "E" Street exit from the freeways). The Bonita-Sunnyside (County) Library is located at 4375 Bonita Road in Bonita - just west of the Otay Lakes Road intersection with Bonita Road, on the north side of Bonita Road.

The Chula Vista South Library is at 389 Orange Avenue (southeast corner on Fourth Avenue) - parking lot is off of Orange east of Fourth.We welcome guests and visitors to our CVGS programs and events - if you are in the greater San Diego area and want to attend our events - please come and introduce yourselves.
Posted by Randy at 11:01 AM No comments: