I took a few pictures of people seated at the tables before the CVGS Holiday Luncheon began. Unfortunately, not everyone was looking at the camera when I snapped the shots - it's like herding cats, only more fun!

This is a fairly small room - maximum occupancy is 40, and we came close! But it works for us - we are able to chat and share across the table, and we can stand up and share our stories and everyone can hear us. 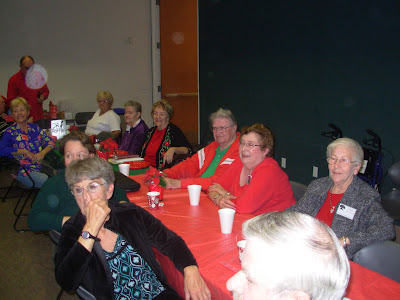 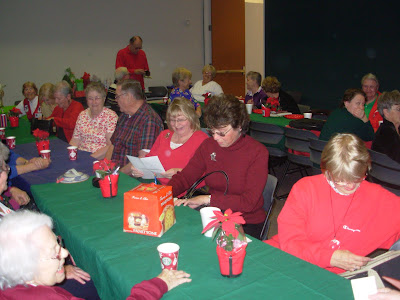 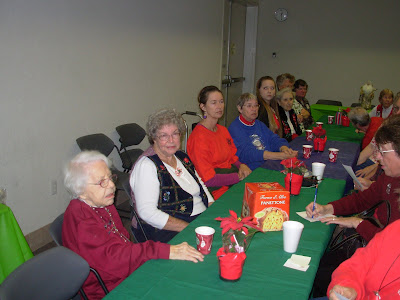 I know that Ruth has more pictures (and probably better ones) - maybe she'll let me post some of them on our blog.

We took pictures of the CVGS Board of Directors - here are the officers attending the luncheon - from the left: 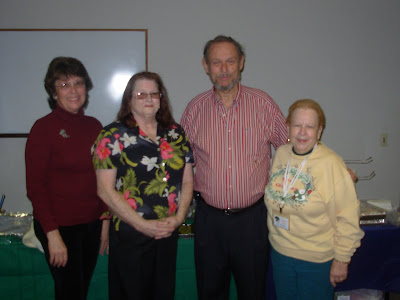 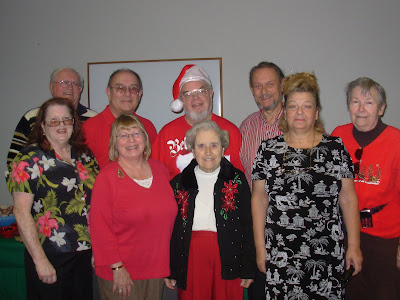 Our Hospitality Chair, Susi P., attended the luncheon (in fact planned and executed it!) but wasn't available for the picture. Our Library Liaison person, Dearl G., couldn't attend the Luncheon.
After all the food, drink and good stories, here are three of our genea-blogging members - from the left:
* Gary B., co-writer of the Chula Vista Genealogy Cafe and webmaster for CVGS
* Ruth H., who writes the Genealogy is Ruthless Without Me blog.
* Randy Seaver, who co-writes the Chula Vista Genealogy Cafe, and writes Genea-Musings, The Geneaholic and the South San Diego County Graveyard Rabbit blogs.
In addition, Susi P. writes the Susi's Chatty Performances on Genealogy blog.
More pictures coming! 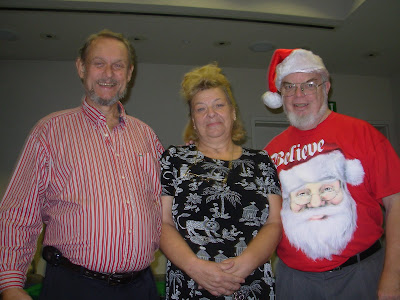 The Chula Vista Genealogical Society Holiday Luncheon today was a smashing success - there were 37 in attendance.

The food was wonderful - Susi organized the potluck part of it and brought in the baked ham and turkey from a barbecue place. There were vegetable platters, many salads, several hot potato and vegetable dishes, rolls and butter, and a dessert table to die for. Well done, faithful CVGS cooks!

Gary got the program started by introducing the 2009 CVGS Board of Directors, and pictures were taken of the officers and board members in attendance. He announced that the CVGS web site has a new search engine installed - try it out!

Next on the agenda was the member sharing. Gary went around the tables and everyone had a chance to share their Genealogy Resolutions for 2010.

John F. started it off with a bang - his three resolutions were to:

* get after the US Government that is hiding genealogy and family history records just to frustrate him.
* Round up all the people who are putting wrong information in online family trees and send them to Gitmo for waterboarding
* Ask God to strike one of his children or grandchildren with the genealogy pox - so that they can continue the family research.

The other resolutions were not as funny but were just as meaningful, including:

* Scan and organize photographs
* Organize the paper files
* Improve my genealogy knowledge and research techniques
* Keep in touch with my extended family
* Track down my ... (fill in the blank!)

We had two drawings this year. One was for the gift exchange. Everyone who brought a gift received a ticket, and when their number was drawn, the person selected a gift from the gift table. The second drawing was an opportunity drawing. The big prize was a large ornamental Santa Claus statue donated by Bernice. An angel figurine, a small rosemary bush, and the table poinsettia plants were also drawn. Danna, Wanda's sister from Michigan, won the Santa Claus and the angel, and Wilma won the rosemary bush. Lastly, Gary auctioned the rest of the ham.

The attendees donated many cans or packages of food, and a lot of children's toys, to Salvation Army. They filled Nancy's SUV, and she delivered them later in the afternoon.

This Holiday Luncheon was a lot of fun -- we had a great time telling stories, eating delicious food, and sharing with our friends and colleagues.

I will post pictures in later posts from my own camera and, hopefully, from several other persons.
Posted by Randy at 5:51 PM No comments:

....
The annual Chula Vista Genealogical Society (CVGS) Holiday Luncheon is scheduled for Wednesday, December 16th, from 11 a.m. to 2 p.m., at the South Chula Vista Library, located at 389 Orange Avenue (southeast corner of Orange and Fourth Avenues). Please enter the parking lot off of Orange Avenue, and enter through the west door on the south side of the building. The room at the Library where the Christmas party will be held has handicap access.

Turkey and ham entrees and beverages will be provided by CVGS. The following food items should be brought by the people with names beginning with these letters. Contact Susi P at (619) 690 -1188 to coordinate all items:

Please bring wrapped items for the gift drawing. This will be a “bring one, get one” drawing. A maximum value of $10 is suggested. There will be an opportunity drawing for the table decorations. The program will be Member’s Genealogy Resolutions for 2010.

Also, please bring groceries for donation to the Salvation Army and, if you wish, unwrapped toys from infancy to teenage children.
Posted by Randy at 5:20 PM No comments:

The newly added or recently updated (from early November to early December) genealogy databases on a number of commercial and free websites include (note - this is not a comprehensive list):

1) New or Updated Databases at http://www.newenglandancestors.org/ ($$)

The Chula Vista Genealogical Society Research Group met Wednesday, 9 December at the Chula Vista Civic Center Library. There were nine in attendance. We went around the table discussing our current research, our research problems, and success stories.

* Joan tried to obtain a Hixson book, "Ten Generations of Hixsons in America," through Inter-Library Loan, but Santa Maria library would not send it down. She knows her grandfather, Daniel Webster Hixson, is in it. She found someone online that has a copy of it and may try to obtain pages from him. The group suggested checking the Family History Library Catalog to see if it is available on microfilm or microfiche, and the BYU Family History Archive and Google Books to see if it might be online. WorldCat may provide more inter-library loan possibilities too.

* Gary has been working in Family Tree Maker 2010 on his Roff families. He's found lots of useful information on Ancestry.com and added it to his database.

* Helen is trying to find the middle name of Samuel K. Winkle, whose son Harrison died in the Civil War. The middle initial may be H or K in longhand script, based on one record, and she cannot determine which it is. The group suggested looking for other names starting with H or K in the online database done by the same enumerator.

* Shirley enjoyed the SDGS Bus Trip to Los Angeles Public Library last Saturday - read many books, but none helped her with her New York deadend lines - William Wright, Jacob Plue, Thomas Graves and Daniel Miller. All are in central New York in the 1800 to 1850 time frame.

* Bobbie brought family history items from their nine day trip to Nova Scotia in September, including books, a framed poster and a map, and her annotated photo album. She told us some history of Acadia, and about her French and Native-American families there. Fascinating!

* Ruth talked about her planned spring trip to eastern Tennessee (her mother's line) and eastern Missouri (her father's line), and taking her father to Branson MO. She has Choctaw heritage in addition to colonial American families. She also summarized her Grandma Genie Camp (described on her Genealogy is Ruthless Without Me blog) experiences.

* Susi is stuck on her Jones line in Petersburg NY - the parents of her ancestor Noyes Jones (born 1809) are "missing." She thinks that they may be Noel and Susannah (--?--) Jones; Noel was the son of Abel Jones. Abel may have raised Noyes Jones in the early 1800's, since they appear next to each other in the 1840 census. She also went to the Los Angeles Public Library and found some Massachusetts town records that detail several generations of her Jones family, but not the "missing" one.

* Randy shared the Martin and Rolfe research work done by his cousin, Mark Putman. It opens up several generations of new ancestors in colonial New Jersey and Massachusetts.

The next meeting of the CVGS Research Group will be Wednesday, 13 January 2010, at 12 noon in the Conference Room at the Chula Vista Civic Center Library.
Posted by Randy at 6:38 PM No comments: 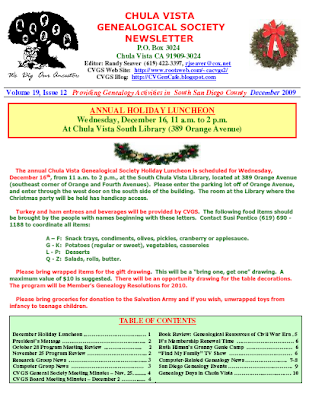 The December 2009 issue of the Chula Vista Genealogical Society Newsletter is available online in PDF format at http://www.rootsweb.ancestry.com/~cacvgs2/Newsletters/09_12dec.pdf.
Earlier editions are available in PDF format at http://www.rootsweb.ancestry.com/~cacvgs2/page04.html
I would appreciate comments on content and format if you have something constructive to give.
Posted by Randy at 6:28 PM No comments:

The Chula Vista Genealogical Society events for December 2009 include:

Also, bring a gift for our raffle and gift exchange, and please bring an unwrapped gift for a child, and a non perishable food item for donations to charity. The Program will be members sharing about their research highlights for 2009.

Note: There will be Computer Group meeting this month.

** Monday mornings (11 a.m. to 1 PM) - December 7, 14, 31 and 28 - Genealogy Table Talk with Dearl Glenn and John Finch in the Family Research section of the Chula Vista Civic Center Library. They are ready and willing to help people with their research, discuss a problem or success, or just tell stories.

The Chula Vista Civic Center Library is located at 365 "F" Street in Chula Vista - between Third Avenue and Fourth Avenue, midway between I-5 and I-805 (take the "E" Street exit from the freeways).