"Ghosts of the USS Midway" Presentation on 25 October 2017 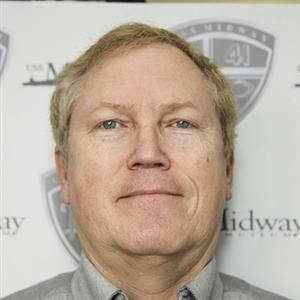 David Hanson is the curator of the USS Midway Museum in San Diego, a position that he has held since December 2004 (not long after the museum opened to the public). In his spare time, he is a military historian and is the leader of the largest paranormal group in the county (the San Diego Ghost & Paranormal Group), which has over 900 members.

On October 25th, he will give a presentation on the "Ghosts of the USS Midway," in which he will discuss incidents of paranormal encounters aboard the USS Midway both during its active Navy career as well as in more recent years as a museum.

These stories came from USS Midway staff members, visiting guests, and in some cases were personally experienced by himself while he led a professional investigative team around the ship during nine months of paranormal investigations. He considers the USS Midway to be one of the most paranormally active sites in San Diego, though it tries not to dwell upon it. Indeed, disclosures to the public of the USS Midway's hauntings are rare, and do not occur in any print or media.

All programs of the Chula Vista Genealogical Society at the Chula Vista Public Library are free to attend.  We encourage community members to attend our meetings.  There will be a short business meeting after the presentations, with refreshments afterward.

In the first hour, Randy provided information on:

*  "Finding Your Roots" series has started on PBS on Tuesday nights at 8 p.m. Pacific time.

*  "Genealogy News Bytes" published on Tuesday and Friday on www.GeneaMusings.com.

*  Best of the Genea-Blogs is published each Sunday on www.GeneaMusings.com

In the second hour, the attendees discussed their successes and challenges, including:

*  Diane Googled an ancestor, Eliza (Mansbridge) Burton, and found a Find A Grave memorial with her photograph and family information.

*  Virginia's great-grandfather was in a Civil War database on Ancestry.com that provided his regiment history and information about the siege at Vicksburg, Mississippi.

*  Helen's brother received a request for a DNA sample from a researcher working on World War II Normandy Beach soldiers.  Her uncle died in the assault in an explosion on the beach, and a report on him was sent by the researcher.

*  Jean T. found a photograph of her ancestor Richard Dramsfield in an Ancestry Member Tree.

*  Nancy is trying to find a death record for her relative, Sanford A. Painter (1894-1918).  She thought he had died in Texas.  A search on Ancestry found him with a New York death record, and entries in two Ancestry Member Trees which provided the mother's maiden name.

*  Linda went to Salt Lake city for three days researching her Hispanic ancestry at the Family History Library.  She learned how to use the FamilySearch Family Tree, FHL catalog, microfilms and digital microfilm.  She also has an AncestryDNA test result and wants to get her Legacy Family Tree into an Ancestry Member Tree in order to get DNA matches with other testers.  The group suggested creating a GEDCOM file of her Legacy database and uploading it to an Ancestry Mermber Tree, then identifying herself associated with the AncestryDNA test.

The next CVGS Research Group will be on Wednesday, 8 November at 12 noon in the Conference Room of the Chula Vista Civic Center Branch Library (365 F Street, Chula Vista CA 91910).

The Chula Vista Genealogical Society and the Chula Vista Public Library held the second annual FREE Family History Day on Saturday, 30 September, from 10 a.m. to 3 p.m. for the community.   The effort by over 30 CVGS volunteers (we are a 93 person society) was fantastic.Randy Seaver opened the day with a Keynote address on "Become a Family History Detective!"The formal highlight was Ceasar Castro's presentation on "Who Is Chief David Bejarano?"  Ceasar managed to find all 16 2nd great-grandparents and 20 3rd great-grandparents of the former San Diego and Chula Vista police chief.  David's ancestry was from Mexico from the grandparents back in time.  Plus, we got to meet his beautiful family, including a 3-day old grandchild.  It is their ancestry also! 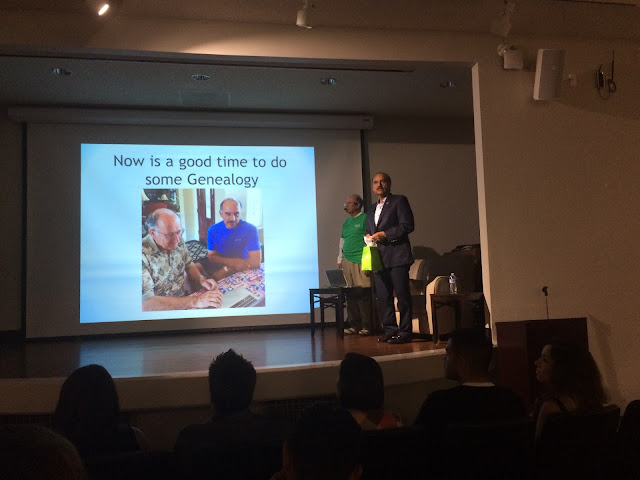 The CVGS volunteers worked with members of the community in nine separate areas:*  In the entry way to the library was the Welcome sign-in desk and drawing table, plus the South Bay Historical Society table had volunteers to answer local history questions, with newsletter handouts. 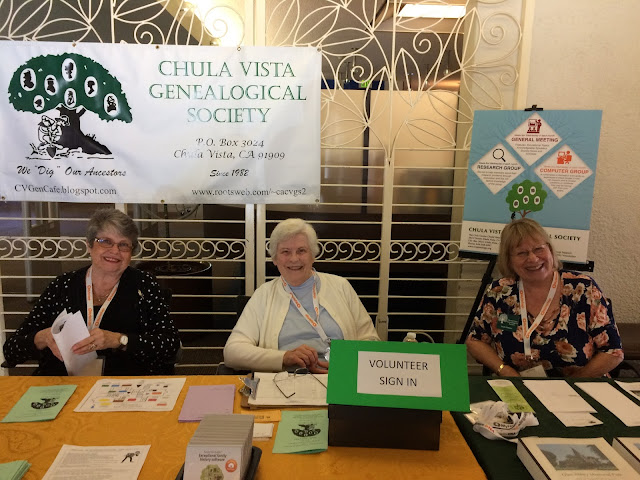 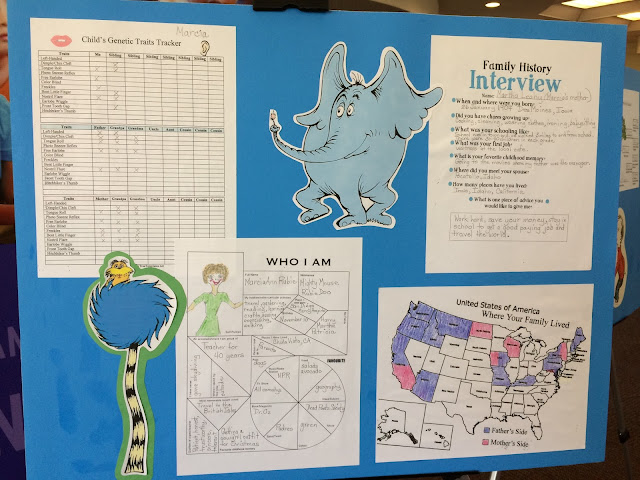 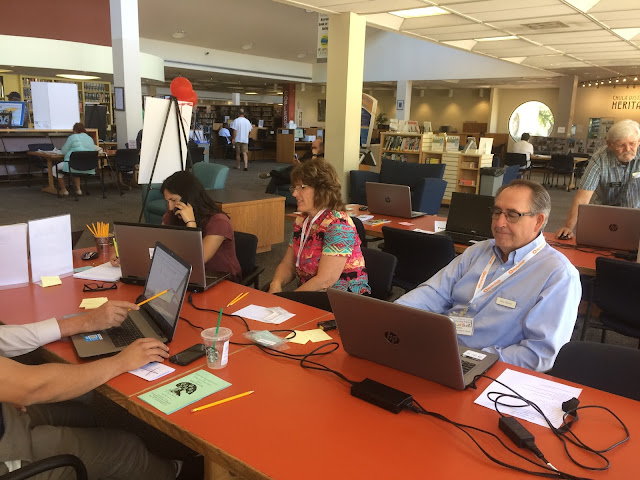 *  The Family History book area had a display of the 20 new genealogy books recently ordered by the library, and volunteers helped persons find specific books. 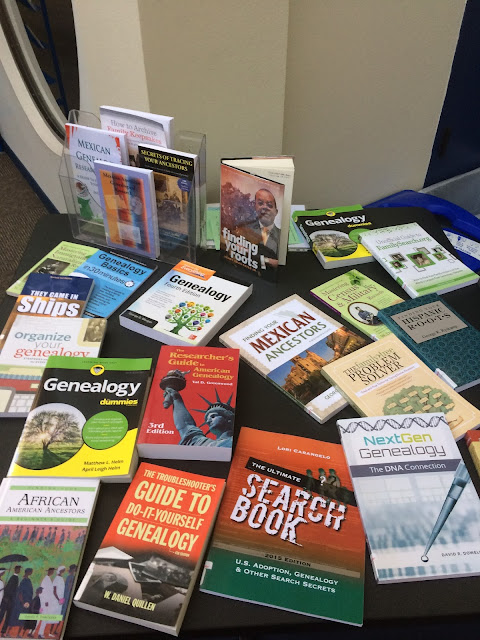 *  There was an "Honoring Our Veterans" display, with a one page writeup and a photograph of the honored veteran.  Twelve CVGS members submitted information for the display.  CVGS will use this display at the San Diego History Center in November. 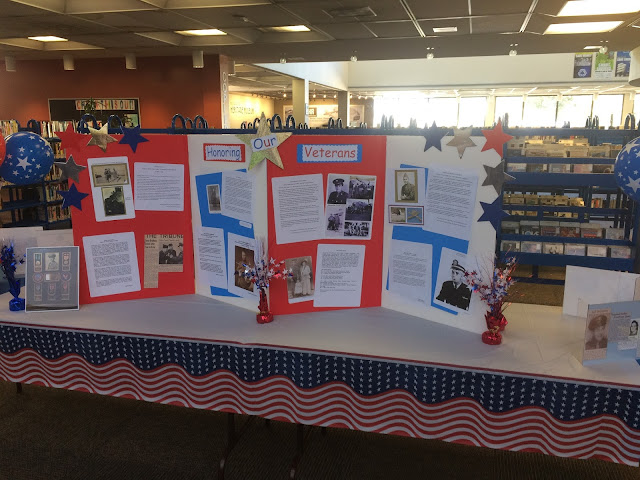 This was an excellent team effort between the society and the library.  It was a wonderful success.  A good time was had by all who attended. So far, we have welcomed two new members to CVGS and hope for more.Ana and Ceasar Castro hosted an after-party for the volunteers on Sunday at their beautiful home in Chula Vista.

The October 7th Saturday Workshop will be from 1 p.m. to 4 p.m. in the Community Room at the Bonita-Sunnyside Library (4375 Bonita Road).

The program will be “Tennessee Research and Some History” presented by Susi Pentico.

We will be discussing the development of Tennessee and why we have to look at more than one state.  Various URLs and books will be recommended. So other states will be mentioned.  Tennessee was broken off from another state early.
Posted by Randy at 2:53 PM No comments: