The Saturday, October 3rd Workshop at Bonita-Sunnyside Library (4375 Bonita Road) is in the Community Room from 1 p.m. to 4 p.m.  The workshop will be on “Family Tree Maker 2014” led by Ken Robison.

CVGS Program on Wednesday, 30 September is on "The Civil War"

John Finch on “The Civil War” 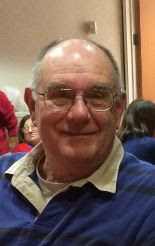 John Finch has been a member of the Chula Vista Genealogical Society since 1999 and has served as Library Coordinator, Program Chair and President (2004 -2006 term).  He is also a member of genealogy societies in his areas of his research.  He retired from the U.S. Navy in 1980, and from the San Diego County Probation Department in 1999.John developed an interest in his own family history at a very young age, but did not begin an active pursuit of research until after retiring in 1999. Now, he spends several hours each week researching his family and volunteers, at the Chula Vista Civic Center Branch Library, every  Wednesday morning to assist new and seasoned researchers.John’s topic today, The Civil War, is of special interest to him.  He has three direct ancestors that fought in this conflict and he is very proud of their service in this momentous event in our history.  It is his goal that you may learn how to identify your veteran ancestor and learn details of his service enhancing you’re family experience.

John Finch has arranged a research trip to the Genealogy collection on the 9th floor of the San Diego Central Library (330 Park Blvd in downtown San Diego) for Wednesday, 23 September 2015.

The library opens at 10 a.m. on this day.  Attendees can take the Blue Line trolley from Chula Vista (get off at the Park and Market station and walk two blocks south).

John will organize a car pool if enough persons participate - contact him at jan27@cox.net.  The car pool will leave the downtown Chula Vista parking structure (second level) at 10 a.m. and will park in the pay lot opposite the library (enter on K Street between Park and 14th).  There is a Padres game that evening, so cars will have to be out of the parking lot before 3 p.m.
Posted by Randy at 4:16 PM No comments:

The September 2015 Research Group of the Chula Vista Genealogical Society on Wednesday, 9 September had 15 in attendance.

In the first hour, we had a guest speaker - Dave Keene, the Chief Technology Officer of everyStory (http://www.everystory.us/), a cloud-based story sharing website and mobile app.  At present, it is available for iOS devices - iPad and iPhone - with iOS 8 and later;  an Android version is in the works.  In everyStory, the user can upload photographs from their camera or from their computer, and then narrate a story about the photograph in their mobile device.  The audio recordings are attached to selected photographs.  Users can invite family to share their photographs and stories also.

Dave demonstrated how the program works, using his iPhone, his iPad and his laptop computer all hooked up to the projector.  everyStory is FREE to use for up to 500 photographs and unlimited audio recordings, and for an unlimited number of photographs and recordings, the cost is $3.99 per month or $39.99 per year.

In the second hour, the attendees discussed:

*  Randy described and demonstrated searching and finding for probate records in several states in Ancestry.com's new Wills and Probates collection.  He noted that not ALL probate records are included yet for every state, but some states are fairly complete.  He also described the latest MyHeritage video concerning the seven unique technologies that they have developed since 2012, including Smart Matches, Record Matches, Instant discoveries and more.

*  Karen Y. reviewed how CVGS responded to an inquiry about Mount Olivet Cemetery in South San Diego, which has graves from 1868.  We were able to provide contact information so that he could visit the cemetery.  Another correspondent, Karl, wanted information about a great uncle and aunt who were who lived here in 1942.  He wanted to find cousins or friends or neighbors who knew Warren and Myrtle Wirth, and what records could be found for them.

*  Diane G. signed up for an Ancestry.com free trial, and found lots of information about some of her families.  Her oldest son has Fuller ancestry from the Mayflower.  Diane made a notebook for him with her findings.

*  Shirley received a box of papers for her Sypher/Seibert family in New York from a lady in Wisconsin, who had done research in the 1930s.  She noted that "this is how we used to do research."  She passed it around - it had pedigree charts and family group sheets.

*  Susi received a book on a Jones surname line who migrated from New York to Michigan via canals and lakes.

*  Susan put cemetery photographs on Find A Grave for her Indiana grandparents.  She had just returned from a research trip to New York and visited Ellis Island and New York Public Library.

The next CVGS Research Group meeting will be Wednesday, 14 October 2015, at 12 noon in the Conference Room at the Chula Vista Civic Center Branch Library (365 F Street in Chula Vista).

CVGS Newsletter for September 2015 is Published

The Saturday, September 5th Workshop at Bonita-Sunnyside Library (4375 Bonita Road) is in the Community Room from 1 p.m. to 4 p.m.