Ceasar Castro: “California and the Mexican-American War
From a Genealogical Point of View”

Ceasar Castro is a local boy. He graduated from Hilltop High School and San Diego State with a degree in Electrical Engineering.  He worked at the Navy R&D Laboratory on Point Loma for 36 years before retiring. 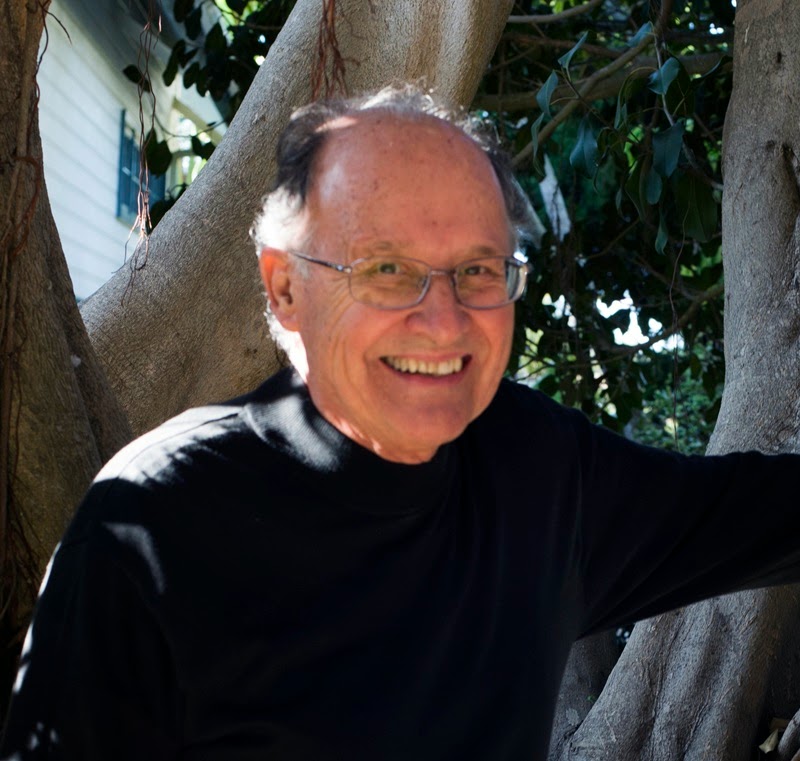 Ceasar started working on his genealogy in 2008 when his sister, who had started earlier, asked him for help. However, slowly he took over the research. He joined the San Diego Genealogy Society and the Chula Vista Genealogy Society to learn more about genealogy. All of his ancestors come from Baja California. In researching his Castro ancestors, he discovered that two of his great-grandaunts married Irishmen in Baja. This puzzled him - how did the Irishmen end up in Baja around 1850? This started him delving into the history of Baja and resulted in his research on the Mexican-American War.

When historians write about history, they are interested in who made decisions and the result of those decisions. If an army is involved, they may give the names of some of the officers but not of the common soldiers. They usually only give the number of soldiers. But we are genealogist; we seek the names of all the soldiers. That is because we are usually looking for a particular person(s). This presentation on the Mexican-American War is from that perspective; what were the names of all the people involved in the Mexican-American War in California.

This meeting is open to all persons, and is free of charge to attend.  There will be a short society business meeting before the program speaker.  Snacks are provided by CVGS volunteers before and after the meeting.

The February meeting of the Chula Vista Genealogical Society (CVGS) Research Group on 12 February was a lively affair with 22 in attendance, including two new members.

After introductions, there were announcements about the Escondido Family History Fair on 1 March 2014 - it's free but you need to register - and the CVGS Spring Seminar on 29 March 2014 with Jean Wilcox Hibben as the featured speaker.

He attempted to show Judy Russell's keynote talk in the meeting, but the video was stalled by the relatively poor cell reception in the conference room.  Instead, Randy showed his Flipboard magazine for "Randy at RootsTech 2014" at https://flipboard.com/section/randy-at-rootstech-2014-bFpVfG.

In the second hour, several attendees shared their recent experiences and research questions:

*  Gary found several photos from his mother's estate that did not have persons identified on them, so he is trying to match faces from those photos to photos that do have names on them.  For one photo, he put other photos of who he thought might be the same person on the same sheet of paper; the group thought that they were not the same person.  For a second photo, he had five other photos of the known person, and the group thought they were the same person.  The group noted that there are several websites that do face matching from photographs.

*  Helen had a photo in her collection and didn't know who it was.  She was checking Ancestry Member Trees for her 3rd great-grandfather, John Henry Winkle, and saw the same photo attached to another person's tree with the name.

*  Felicia has a family story that her ancestor, Mary Gillham who married a Campbell, had been kidnapped by the Kickapoo tribe in the early 1800s, was found and ransomed in Illinois, and an Act of Congress granted land to her in 1815.  She wondered if there are any records for the land grant.  The group said that Acts of Congress should be available to review and to check the Library of Congress and the National Archives.  Land may have been granted through the Bureau of Land Management - check the http://www.glorecords.blm.gov/ website.

*  Gerry's mother had German ancestry, and she wondered how to find more information about it. The group recommended finding as many records as possible (marriage, death, immigration, naturalization, obituary, cemetery, childrens births, etc.) that might identify where she was born and her parents, or siblings, names; then search for records for the parents and siblings also.  Then check with the San Diego Genealogical Society German interest group, the San Diego FamilySearch Library in Mission Valley, and the www.GermanRoots.com website for research helps.  Her mother's grandfather's name was Christian Floel, and we found that he had a Civil War Pension File that could be ordered from the National Archives for a fee.

The next meeting of the CVGS Research Group will be on 12 March 2014 at 12 noon in the Conference Room at the Chula Vista Civic Center Library (365 F Street).

The February 2014 issue of the Chula Vista Genealogical Society (CVGS) Newsletter was published last week.  You can read it online, in a PDF format - use the Newsletter link at www.CVGenealogy.org. 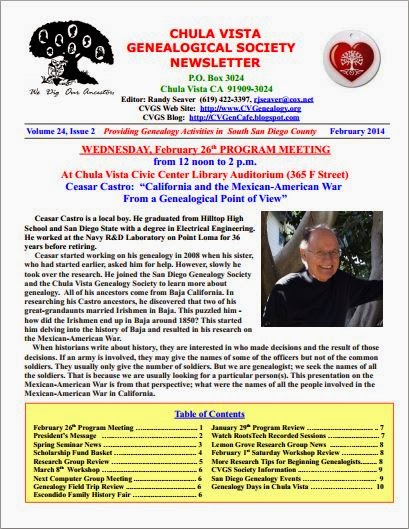 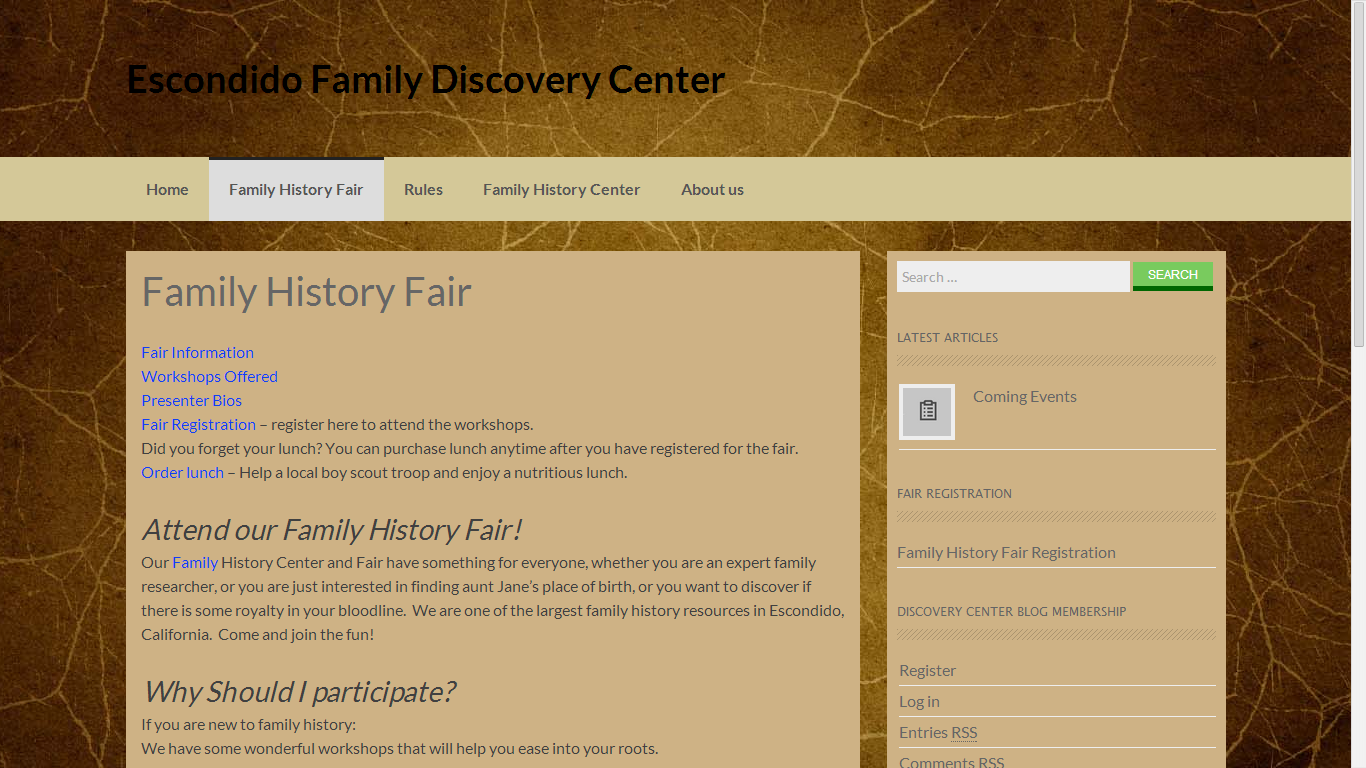 At the top of the page are links for the Fair Information, Workshops Offered, Presenter Biographies, Fair Registration, and Order Lunch (which costs $9.75 and benefits the Boy Scouts).There are five presenter session times, and a total of 43 classes, with 12 speakers, including Dan Poffenberger, Jean Wilcox Hibben, Debby Horton, Michaele Burris, Ann Montgomery, Tom Underhill, Del Ritchhart, Joel Weintraub, Cassandra Helzer, Ed Ries, Alice Volkert, and Butch Hibben.Attendees must register to attend, and early registrants will receive a free Wall Fan Chart (if they have added their family to the FamilySearch Family Tree or upload a GEDCOM file after registering).  The chart looks like this: 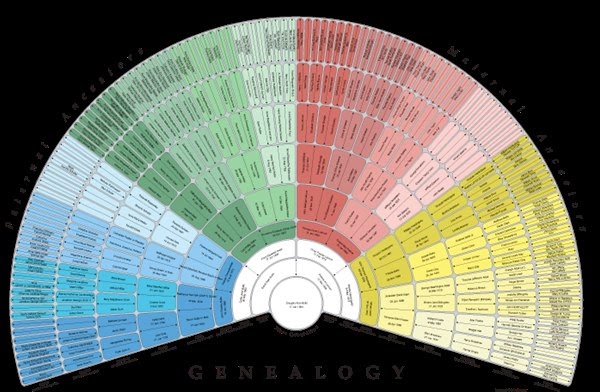 This is an excellent opportunity to obtain genealogy education for little or no cost from well-known presenters.  I encourage local San Diego society members to sign up at attend.

The January 29th Chula Vista Genealogical Society program meeting featured CVGS member Susi Pentico's presentation on "Following the Path."  There were about 40 attendees for this program.

Susi said that there are Known Paths (documented by records you have), Unknown Paths (there may be records you don't have), and Hidden Paths (clues in records for other families and locations).  She also noted that Indian Trails often lead the way, since many current highways are along those old trails.  Early families followed the trails as they migrated south, and west over the decades.  Learn the trails and study the tribes.

A researcher needs to make research plans and set goals, including;

*  Learn and understand the proper research "ways" - methods, analysis, etc. Use books, websites, tutorials, etc. to learn methodology and available resources.  Read every sentence in a record to make sure that you capture everything the record offers.

*  Go back and study what your parents, grandparents and other relatives told you.  Are there clues there?  Are there unfinished questions left by them?  Find descendants of siblings of ancestors to see if they have family information.

*  Collect evidence to support or refute family stories.  Find records and information about your persons by searching in the available resources, both online and in libraries or archives.

*  Use a timeline - note the date, names, and location of events that happened in your ancestor's family and lifespan.  Consider associations, local and regional historical events, disasters, etc.

*  Is what you know correct?  It may look right, it may fit, but is it right?  You need to review your information for a person or family occasionally.

*  Genealogy research has changed - it's not the same now as it was 10 years ago, or 50 years ago.  Many records are now available in online databases and websites.  However, not everyone has computers, smart phones or tablets.  Don't go too fast or you may lose track of what you have found.

Susi noted many different record types that may help you follow your ancestor's path, including;

*  The work of other researchers in books, periodicals, websites, and files in repositories and archives.

*  Historical records, such as census, vital, church, military, immigration, newspapers, cemeteries, probate, land, etc. that can be obtained online, in county offices and courthouses, and in local, regional or national archives or libraries.

Susi used her ancestor Henry Huffman as an example of following the path.  He received land in Virginia in 1752 from his brother George, moved to Pennsylvania at some time, had four children in Greene County, Pennsylvania between 1800 and 1810, and died before his will was proved in 1812 there.