Our speaker at the August 28th Chula Vista Genealogical Society meeting was Terry Connors, the San Diego County Land Surveyor, with the Department of Public Works.  There were 31 members and guests in attendance.

Terry's presentation was about "Surveying and Land Records" especially in San Diego County.  He provided a brief description of the history of land surveying, including measurements, directions, and the system of rectangular surveys used in the Western States (principal meridians, baselines, ranges, townships, sections and aliquot parts of sections).  The top of Mount San Bernardino is the "center point" for Southern California.

The San Diego County Surveyor's office website is at http://sdcounty.ca.gov/dpw/surveyor.html.  Terry described many of the functions of his office and department in his presentation.  The County Surveyor's office serves 18 cities, the County, utilities, CalTrans, tribes, railroads, US Geological Survey, National Geodetic Survey, Bureau of Land Management, and other entities.

The major tasks in the Land Surveyor's office include:

*  San Diego County Real Time Network GPS - the commercial Global Positioning System is accurate to about 5 meters.  The SD RTN is accurate to 0.5 meters with 19 base stations in the County.

Terry showed several examples of the surveying maps and lists during his presentation.  He also brought three of the earliest books showing land surveying in San Diego County:

*  An 1853 book with the first surveys showing owners of land parcels.
*  A ledger from the Board of Supervisors listing actions relating to land records
*  A plat book from 1910-1912 time frame for each township showing names on property in rural areas.

In closing, Terry had a little quiz for us:  How many of the four men on Mount Rushmore were surveyors?  Does anyone know the answer?

This was a fascinating presentation for genealogists interested in land records.  I thoroughly enjoyed it, and appreciated Terry coming to share his knowledge and the functions of his office with us.  He noted that some of the land surveying records are available at the County Land Surveyor's office in San Diego.   The research counter (located in Cartographic Services, 5510 Overland Avenue, 2nd Floor, Room 270, San Diego, California, 92123) has the following documents available:  BLM plats and notes, GIS maps, vertical benchmarks and other miscellaneous record documents.

Terry Connors is the August 28th program presenter with the topic of “Surveying and Land Records.”  He is the current San Diego County Surveyor. With the County Tax Assessor's office.

In his talk, he will review the Assessor's office; the Recorder's office (which deals with vital records certificates, deeds and patent searches); the Tax Collector's office; the Clerk of the Board of Supervisors; and the County Surveyor's office.  For the latter, he will discuss Federal Land Maps, 1853-1900, Private Survey Maps, and Other Resources (Non-recorded Maps, and Road Books).

Terry was born and raised in Minneapolis, Minnesota, and moved to San Jose, California in 1963.  He graduated from Campbell Union High School in 1965, attended two years of Junior College before joining the United States Naval Reserves at Alameda.  Terry flew Anti-Submarine Warfare aircraft from 1969 to 1973.  He worked for Santa Cruz County in 1969 as a rear chain-man on a survey crew, and went into private industry in 1978.  He was licensed by the State of California in 1982.  Terry was a principal in a consulting engineering firm from 1986 to 2000, ran his own business from 2000 to 2007, and joined San Diego County in 2007 as the County Surveyor.  He is married with two children.
Posted by Randy at 11:55 AM No comments:

The August 2013 issue of the Chula Vista Genealogical Society (CVGS) Newsletter was published this  week.  You can read it online, in a PDF format - use the Newsletter link at www.CVGenealogy.org. 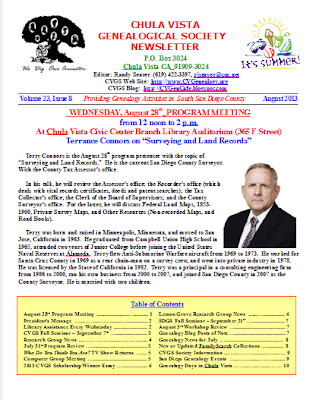 The August meeting of the Chula Vista Genealogical Society (CVGS) Research Group was on Wednesday, 14 August and had 17 attendees.

In the first hour, Randy shared some of the genealogy news from the past month and some of his recent research findings, using the Internet on his laptop and the projector, including:

*  The Story view in Ancestry.com's Member Trees can be used to tell the story of a person's life.  This is likely to interact with the photographs on the 1000Memories mobile app.

*  Searching for a person with a common name - Hannah Brown in colonial Massachusetts - by finding candidate parents using vital records, probate and land records, and eliminating those that died or married someone else.

In the second hour, the attendees shared their research questions, challenges and successes:

*  Karen S. asked where she could find more information about headrights in early colonial Virginia.  The group suggested checking the FamilySearch Research Wiki, reference books on Virginia, and the Virginia Historical Society.

*  Bobbie described her two summer research trips. The first was to Hamburg, Erie County, New York where her immigrant ancestors resided between 1849 and 1855.  She visited the church building (now a home) and the school her ancestor attended.  She bought the "Images of america" book for the town also.  Their second trip was to Quebec where they attended the 350th anniversary celebration of the arrivals of the "Daughters of the King" in 1663.  She passed around the "Sent by the King" newsletter published by the historical society that included her article about her own "Daughter" and the mitochondrial DNA research involved.

*  Arline asked how she could find a website with a specific historical map.  The group suggested historical map websites, the USGenWeb county pages, and local genealogical or historical societies.

*  John pursued a green leaf Hint in an Ancestry Member Tree and found a lead for one of his New Hampshire ancestors in a town book available to purchase on amazon.com.  He bought two books printed on demand for a reasonable price.

*  Shirley found a Tioga County, New York book on www.Archive.org that had information about one of her ancestors.

*  Virginia had a connection through her 23AndMe autosomal test, and added two more generations in her Fisher line from the mid-19th century.

The next CVGS Research Group meeting will be on Wednesday, 11 September 2013 in the Conference Room at the Chula Vista Civic Center Branch Library.

We discovered things about well-known colonial women that we didn't know, like Martha Washington following her husband George to each of his winter encampments, including Valley Forge.

We also heard inspiring stories of Sybil Ludington, "the female Paul Revere', who was only 16 when she rode 40 miles (twice as far as Revere) to rouse the militia. Or the 64-year old widow who rode horseback from Virginia to North Carolina to care for her son, wounded in battle.

We learned about Margaret Corbin, who was on the battlefield with her husband, and took his place at the cannon when he was killed.  She was severely wounded, and was the first woman to receive a soldier's pension. She is currently the only soldier of the Revolutionary War buried at West Point.

Other stories of spies, camp followers and mothers defending their homes were inspiring additions to our knowledge of America’s War for Independence.

If you are interested in learning more about these early American heroines, Karen suggests these websites:

The Chula Vista Genealogical Society events for August 2013 include:

**  Wednesdays, 7, 14, 21, and 28 August, 10 a.m. to 12 noon., Chula Vista Civic Center Branch Library (365 F Street) -- Research Assistance in the Family Research area.  John Finch will help you with your research problems.  Bring your laptop if you want to do online research.

We welcome guests and visitors to our CVGS programs and events - if you are in the greater San Diego area and want to attend our events - please come and introduce yourselves.  All CVGS events are FREE to attend, except for some seminars and picnics.