"Research Methods in Pennsylvania" on Saturday, 3 September at Bonita Library

The September 2011 Workshop for the Chula Vista Genealogical Society (CVGS) is Saturday, 3 September, from 1 p.m. to 3 p.m. at the Bonita-Sunnyside Library (4375 Bonita Road in Bonita).

The workshop will be "Research Methods in Pennsylvania," presented by Susi Pentico, the CVGS Education Chair.
Posted by Randy at 1:25 PM No comments:

The Chula Vista Genealogical Society events for September 2011 include:

** Wednesday, 28 September, 12 noon to 2 p.m., Chula Vista Civic Center Branch Library (365 F Street) -- General Society Meeting meets in the Auditorium. Arnie Botts (Private Investigator) will present "How to Find Relatives - Living or Dead." There will be a society business meeting before the presentation.

The Bonita Library is located at 4375 Bonita Road in Bonita - just west of the Otay Lakes Road intersection with Bonita Road, on the north side of Bonita Road. The Chula Vista South Library is at 389 Orange Avenue (southeast corner on Fourth Avenue) - parking lot is off of Orange east of Fourth.

We welcome guests and visitors to our CVGS programs and events - if you are in the greater San Diego area and want to attend our events - please come and introduce yourselves
Posted by Randy at 1:07 PM No comments:

The CVGS Computer Group on 17 August 2011 had ten attendees.

Randy demonstrated how to register for Legacy Family Tree webinars and how to access the archived webinars.

Next up was a demonstration of how to use the FamilySearch website (https://www.FamilysEarch.org), including doing a global search and a specific collection search in the new site, and how to access the databases on the old site (http://www.FamilySearch.org/eng).

Lastly, the group explored the US Genealogy Web site (www.USGenWeb.org) and looked at the California GenWeb page (www.cagenweb.org).
Posted by Randy at 11:25 AM No comments:

We tried something different this year for the CVGS Annual Summer Picnic - we held it at the Bonita-Sunnyside Library and had the program indoors in the Community Room on Monday, 15 August.

The event started at 11 a.m., and the 13 attendees had their bring-your-own lunch in the shade on the patio adjoining the Community Room. We shared research and vacation stories.

We moved into the Community Room at around noon, and President Gary Brock showed some videos of Scottish Highland Games. 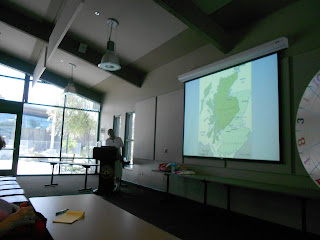 Rather than physical Scottish games, Gary used the "Let's Make a Deal" type of game board (which he made last year for the picnic) and we spun the dial to get as high a number as possible for four different Scottish "games." The highest number was 16, and the spinner could choose to "hold" at any time. The spinner had to take the result on the third spin of each turn. Linda Seaver won the game in a spin-off with Mary Lou Montez. It was great fun to see the strategy of the players. 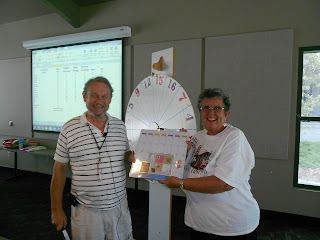 
The featured speakers and their subjects will be:

Keynote Address: Donna Bradley -- "Ways of Getting Over, Around or Under Your Brick Walls"

This is an all-day paid event. The registration fee is $35 which includes morning refreshments, a keynote address, two main sessions, a fully catered lunch, afternoon light refreshments, opportunity drawings and door prizes. There will be vendors on hand with books, CDs, Photo kits, Handwriting Analysis and a Society book sale.

The schedule for the day is:

...
The Chula Vista Genealogical Society Research Group meeting had a lively group of 15 participants. In the first hour, the group watched a Legacy Family Tree webinar by Leland Meitzler who presented "Chasing Women: Finding Your Female Ancestors," which Randy obtained at the SCGS Jamboree in June. We passed the handout around and attendees signed up for a copy of it. In the presentation, Leland used examples from his own research to show which documents are useful to find the maiden name of female ancestors.

We had an open sharing in the second hour, with research highlights, questions and answers, etc. The highlights:
* Karen shared her good luck at Carlsbad Library finding books on the Geoghagen and LeCompte families of colonial Dorchester County, Maryland. She learned a family story too - that a native put a curse on Anthony Lecompte, the immigrant, because Anthony killed some natives. One of Anthony's sons, Moses LeCompte, went blind in early adulthood, and nine of his 11 children did also. A recent study identified the blindness as retinitis pigmentosa. Karen also shared finding a cousin who had wills, letters and patents for Grass Reeden, a Geoghagen ancestral home. The cousin also has found gravestones in a swamp, saw several ancestral houses and found Grass Reeden. There is a line of gravestones on the edge of the Geoghagen homestead property.
* Kris received her grandfather's military records from the National Personnel Records Center in St. Louis. John looked them over and gave Kris advice on what they documented. Kris is up to five binders of family history material, and has found many contacts on Ancestry.com.
* Shirley found her ancestor Daniel Miller on two different 1850 census pages in New York and Pennsylvania and wonders how that happened. She also found that her ancestor Thomas Graves enlisted twice in the War of 1812, and has a pension file. The file enabled her to find his family in the 1810 US Census in Minden, New York. John Graves, the father, enlisted in the War of 1812 also.
* Gary found a writeup in the book Memoirs of Lenawee County, Michigan for an uncle of his great-grandfather, which had information on the family. He has also found Philip Roff in the 1790, 1820 and 1840 censuses in different places.
* Cynthia asked about cousin relationships and the "removed" terminology. The group explained it by diagramming a typical family tree.
* Connie has her grandfather's life insurance papers, and wondered if the application was available from the insurance company. The group thought that the company considers those private and probably destroyed them some time after the insured's death.
The next meeting of the CVGS Research Group will be Wednesday, 14 September at 12 noon in the Conference Room in the Chula Vista Civic Center Branch Library. Gary will lead this meeting, since Randy will be on vacation. The group will watch the "Backing Up Your Genealogy Data" webinar featuring Thomas MacEntee, followed by group sharing.
Posted by Randy at 2:35 PM No comments:

The annual Chula Vista Genealogical Society picnic will be on Monday, 15 August from 11 a.m. to 2 p.m.  We will meet on the Patio outside the Community Room at the Bonita-Sunnyside Library (4375 Bonita Road in Bonita), overlooking the golf course. Come into the Community Room (from inside or outside the Library) and go through the north door to reach the patio).


Bring a wrapped gift for the gift drawings (maximum $10), managed by Shirley Becker. There will also be a free Door Prize drawing.

The Program will be a “Scottish Highland Game” devised by President Gary Brock.

A map of the library location: 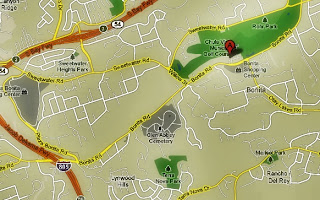 The societies represented include:

If you are a San Diego area genealogist, please come on Sunday, August 7th and learn about the educational opportunities offered by these genealogical societies.
Posted by Randy at 9:15 AM No comments:

...
The Chula Vista Genealogical Society events for August 2011 include:

** Monday, 15 August, 11 a.m. to 2 p.m., Bonita-Sunnyside Library (4375 Bonita Road) -- Annual CVGS Picnic meets in the outside patio. Bring your own lunch and drink.  The theme will be "Highland Games."
The Chula Vista Civic Center Branch Library is located at 365 "F" Street in Chula Vista - between Third Avenue and Fourth Avenue, midway between I-5 and I-805 (take the "E" Street exit from the freeways). The Bonita Library is located at 4375 Bonita Road in Bonita - just west of the Otay Lakes Road intersection with Bonita Road, on the north side of Bonita Road. The Chula Vista South Library is at 389 Orange Avenue (southeast corner on Fourth Avenue) - parking lot is off of Orange east of Fourth.

We welcome guests and visitors to our CVGS programs and events - if you are in the greater San Diego area and want to attend our events - please come and introduce yourselves.
...
Posted by Randy at 9:22 AM No comments: