The Chula Vista Genealogical Society and Chula Vista Public Library are sponsoring a FREE community-wide event on Saturday, 30 September with a Family History Day at the Civic Center Branch Library (365 F Street, Chula Vista, CA 91910).  The flyer is below: 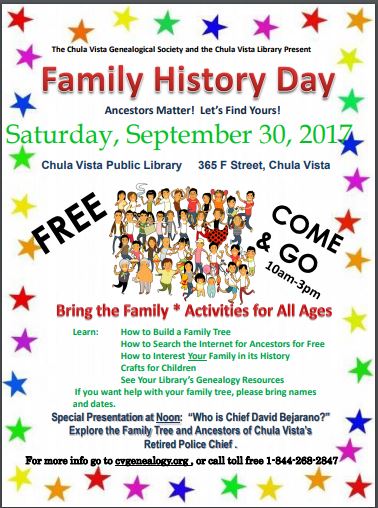 The event will be open from 10 a.m. to 3 p.m.  There will be two presentations in the Library Auditorium:

There will be activity areas with CVGS members to help you:

*  How to Build your Family Tree

*  How to Search the Internet for Free for your ancestors

*  How to interest your family in their history

No registration is required, and this event is FREE for all persons to attend.  For more information, see https://chulavistagenealogysociety.wildapricot.org/event-2618697  or call 1-844-268-2847 (toll-free).

There were 11 attendees at the Chula Vista Genealogical Society Research Group meeting on Wednesday, 13 September.

*  RootsTech 2018 schedule has been released - Wednesday, 28 February to Saturday, 3 March 2018.  There is no separate Innovator Summit, but the Innovation Showdown will continue.  Registration for RootsTech will open on 20 September 2017.  See www.rootstech.org for more details.

*  FamilySearch has a webinar series in September with several presented every day - see the list at Free Family History Library Classes and Webinars for September 2017.

*  Randy wrote a blog post about How and Why Do You Use the FamilySearch Family Tree?

*  One of Randy's mysteries is the parents of Ann Marshman (1784-1856) in Hilperton, Wiltshire.  Email from another Marshman researcher provided more information about the Marshman family and is ongoing.

In the second hour, the attendees described some of their successes and challenges:

*  John's great-grandmother is Mary Jane Allen, who had a sister Susan.  Their mother was Matilda (Yount) Allen in Pennsylvania.  John has 15 DNA matches with a Paden family line, but a descendant of Susan Allen does not.  Another sister of Matilda, Sophia Yount, married William Paden, and had no children.  The descendant of Susan has mementos from the William Paden family.  In the 1870 U.S. census, Matilda, Mary Jane and Susan Yost (Matilda';s mother's maiden surname) resided in the same dwelling with William Paden and his wife.  After much discussion, the group thought that that Mary Jane Allen was fathered by William Paden or one of his uncles, but Susan was fathered by someone else (named Allen?).

*  Bobbie has fulfilled one of her short-term goals - she found the names of her 2nd great-grandparents in England - John Morris and Elizabeth Cornish.

*  Diane has DNA matches with Naomi in England, and she knew about some of Naomi's relatives. Diane has been emailing with Rita about their Houghton ancestors in England from the late 1700s.

*  Ralph noted that the FamilySearch Family Tree is constantly adding information.  He has been able to add two more generations to his wife's family tree.

*  Arlene went on vacation to the Grand Tetons and Yellowstone for the solar eclipse with a friend, but was able to spend three days at the Family History Library in Salt Lake City.  She found a book by her school friend that provided information about her 2nd great-grandfather's family in Mesa, Arizona.  She was able to get a digital copy of the book.

*  Gary has a DNA match with about 800 cM in 23 segments, and wondered what the relationship might be.  The DNA relationship chart indicates a first cousin, a great uncle or aunt, or a grand nephew or niece might be candidates.  This match is probably from Gary's birth father's family.

The next meeting of the CVGS Research Group will be at 12 p.m. on Wednesday, 11 October 2017 in the Conference Room at the Chula Vista Civic Center Branch Library (365 F Street, Chula Vista CA 91910).

The September 2017 issue (Volume 27, Issue 9) of the CVGS Newsletter was published on Monday, 11 September.

The Table of Contents for this issue is:

The CVGS Newsletter is available on the CVGS website (www.cvgenealogy.org) - members can see the current issue, but non-members cannot see the last two issues of the newsletter.

The 30 August CVGS general meeting had 25 members and several guests in attendance, and they heard and saw six members describe their most exciting genealogy research discovery in recent years.

Bobbie's most exciting, surprising, and puzzling find unfolded in 2004, at the beginning of my family research. She always thought that her great grandfather, Lorens Titus, was the first German immigrant to Fremont, Lake, Illinois, where she grew up. She began her search for Lorens’ parents by going through the census for Fremont, and she was shocked that the 1870 census showed Lorens living with his siblings and parents, Johann and Kundegunde Titus. Bobbie's great-great grandparents lived about two miles away from her home growing up, and she never knew it. After she found their probate records in Lake County Genealogy Society’s microfilm, Bobbie found their graves in the parish cemetery, which also contained four other generations of her family.

Ann’s brick wall discovery centered around her great-aunt, Anna Weber Clair, who committed suicide in 1921 in Denver, Colorado.  Trying to get more information on Anna’s life prior to her death proved to be elusive . . . until her probate records were found. With this document, Ann discovered that earlier documents about her great-aunt (i.e., she was despondent due to leaving her husband in an asylum in Portland, Oregon) were not true.  Ann’s great-aunt was mentally ill and even with the 24-7 care and supervision provided by her brother and other members of the family as well as some time spent in an Ohio asylum, she was unfortunately still able to take her own life.

Randy's most exciting find in 2016/7 was the will of Elizabeth Auble (1814-1899) of Philadelphia.  She was the "old maid" sister of his 2nd great-grandfather, David Auble.  Before he found this will, Randy knew about four siblings of Elizabeth.  The will bequeathed money and property to 22 persons, including her three living brothers, and descendants of four heretofore unknown siblings, Sophia, William, Sarah and Nathan Auble.  They were all children of John and Anna (Row) Auble who married in 1804 in New Jersey.  This find spurred descendancy research for this Auble line, and Randy added over 200 cousins to his genealogy database.  Several have already appeared on his AncestryDNA cousin match list.

Susi's most exciting find was very different than most. As members worked to put together the Genealogical Society back in the 1980s, something unusual happened.  There were seven of them working to make this happen.  When they got around to doing Five Generation Charts and swapping them around at their meeting, there were five of them that were direct descendants of Henry Huffman/Hoffman. There were various birth dates until a deed was found in Virginia that clarified who this Henry Huffman was. He was born about 1740 in Virginia.  In Virginia you had to be 18 to own land. That helped us to determine his birth and help sort the siblings and family. He sold this land, in 1805, in Greene County, Pennsylvania and died in December 1811 or January 1812 when the will was probated.   With five Henry Huffmans living in this area, it took a bit (3+ years) to find which one was the direct descendant. Two were cousins, one was an uncle and one was Henry born 1803 and the other one was Henry the father of Henry born 1803, which was Susi's line.  A tax receipt required by Greene County gave them more solid evidence. It was also filed in Hampshire County, Virginia

As he was researching his ancestors, Ceasar Castro discovered that two of his great-great aunts, Angela and Catarina Castro, married Irishman in Baja California. Intrigued, he started investigating why and how the Irishman ended up in Baja. Catarina married Joseph P. Hale on 28 August 1857.  Joseph P. Hale came to New York in 1849 from Ireland when he was 13 years old. In 1852 he earned enough money to sail to California during the Gold Rush period. He was not very good at gold mining and turned to buying and selling cattle. He first bought cattle in Arizona but then switched to Baja for cattle. At that point he must have met Catarina and they married in 1857 in Miraflores, Baja California. They had two daughters, Josephina and Anita. Settling in Baja he discovered the orchilla lichen along the west coast of Baja. The plant is used to produce a bluish dye. He negotiated a contract with the Mexican government to harvest and sell the plant. He shipped the dried plant to England and made a fortune. At the time of his death on 21 April 1893, the San Francisco Morning Call newspaper estimated his estate was worth two million dollars. His daughter, Josephina married Robert John Lascelles Boyle in London, England in 1890. He became the 11th Earl of Cork. They had no children. So Ceasar has no Earl of Cork cousins.

Diane told about the search for her father, Alfred Thomas Burton Longhurst, a sailor in the Canadian navy. She retraced her research footsteps as she made two trips to Victoria, British Columbia. During the first trip to the island of Vancouver, she obtained 10 addresses from the telephone book. She wrote letters to five of her mother’s Podgorenko people and the other five letters went to, she was hoping, to her father’s Longhurst people. A second cousin named Sam Podgorenko called on the eve of the bombings of 9/11/2001.  Eventually, Diane received, in the mail, her long birth certificate with her grandparents’ names of Archibald Longhurst and Lulu Squires. Using internet sources, Diane continued to search for her father until April 2002, when she read the email message, “He is alive!” In time, more email messages followed. Ramon surprised Diane with tickets and transportation to travel to Brampton, Simcoe, Ontario, and she met her father Fred, his second wife, Terry, and six half siblings, just in time to spend her 55th birthday with them in July of 2002.