The Chula Vista Genealogical Society events for December 2011 include:

** Wednesday, 14 December, 11 noon to 2 p.m., Chula Vista South Branch Library (389 Orange Avenue) -- Annual Holiday Luncheon meets in the Conference Rooms (west end of building).  Turkey, ham and drinks will be provided, potluck items to be coordinated with Susi Pentico (619-623-5250).  There will be a brief society business meeting, a presentation about CVGS history, a gift exchange, opportunity drawings, a door prize.  Attendees are requested to bring canned goods and children's toys for donation to the Salvation Army.

The Chula Vista South Library is at 389 Orange Avenue (southeast corner on Fourth Avenue) - parking lot is off of Orange east of Fourth.

We welcome guests and visitors to our CVGS programs and events - if you are in the greater San Diego area and want to attend our events - please come and introduce yourselves.
Posted by Randy at 7:38 PM No comments:

...
The next program meeting of the Chula Vista Genealogical Society will be on Wednesday, 30 November at 12 noon in the Auditorium at the Chula Vista Civic Center Branch Library in downtown Chula Vista (365 F Street). Please enter through the Conference Room (in the east hallway) in order to register your presence, pick up any handouts, and have a snack.


The program will feature Georgie Stillman, ASA, presenting an “Heirloom Discovery Day.” Georgie will evaluate, provide some historical background and estimate a value of family heirlooms brought in by CVGS members. Her expertise is in evaluating and appraising silver, china, glass ware, furniture, artworks, quilts and samplers. 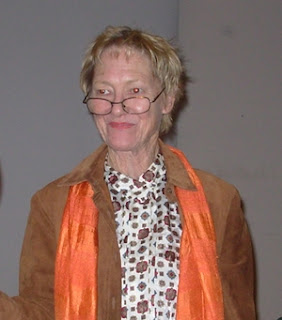 Georgie Stillman (http://georgiestillman.com/bio.htm) has worked as a professional appraiser in London, England, Phoenix, and San Diego since 1971. She has served as president of the American Society of Appraisers (ASA), vice president of the San Diego chapter, and was founding director of the International Society of Appraisers. She has received numerous awards for her outstanding service, including Appraiser of the Year. Besides being a professional instructor at various colleges, she has made many radio/TV guest appearances and written articles for many publications, teaching audiences about antiques and art.

This is the fifth time that Georgie has done this program for us, and it gets better every year!


Save the date, Wednesday, 14 December, for the annual Holiday Luncheon at the Chula Vista South Branch Library. More details later!

...
At the Chula Vista Genealogical Society Research Group meeting on 9 November, we had 12 enthusiastic genealogists.

Randy presented a review of the Civil War Pension File that he received from the National Archives back in January.  The 81 page images sent on a CDROM from NARA were not in date order, so he put them in date order in order to create a timeline of events, starting with when Isaac Seaver declared his intent to obtain an invalid pension (1892) to when his widow died 31 years later (1923).  He then showed many of the different documents included in the Pension File and discussed what and why they were written.

In the sharing portion of the meeting, the attendees highlighted:

*  Gary passed around four books by Angus Baxter in the "In Search Of ..." series for Canada, British Isles, Germany and Europe that the society received as a donation.

*  Sam obtained a World War I Draft Registration card and described it in detail, and has been finding information about ancestral families on the Find-A-Grave cemetery website.

*  John took a picture of an uncle's gravestone in Lee County, Illinois that was toppling due to a tree root.  He contacted the cemetery, and the local monument company, and, for a fee, had the stone righted and cleaned.  He showed us "before" and "after" pictures.

*  Dearl has the feature articles from Family Tree Magazine for all of the states and cities published to date, and will share them with society colleagues.  He noted that he has his great-grandfather's Confederate Civil War Pension File from Texas.

*  Gary is working on a way to view the old World Family Tree CDROMs for Windows 7 and 64-bit computer users.

*  Virginia has two Civil War Pension Files for her Union ancestors, one has 300 pages.

*  Bobbie applied for and received an Early Settlers Certificate for Lake county, Illinois.  She received some pictures of the immigrant farm houses, and found the location on a Lake County plat map.

*  Sylvia has a picture of her 1850's ancestral homes, who also built a schoolhouse on their land in Missouri.

*  Connie will try to join the Daughters of Union Veterans following Susan's Civil War presentation.  She asked how she could find out more about her adopted brother's birth parents (they know the names) in the 1940s in San Diego.  The group suggested searching for the marriage record, death records, obituaries and census records for them based on the known information.

*  Genie is just starting her research.  Her mother's side is well documented, but her father's is not.  That side of the family wouldn't talk about the family.  She is concerned about health issues.

There will be no Research Group meeting in December, since 14 December is the date of the CVGS Holiday Luncheon party at the Chula Vista South Branch Library (389 Orange Avenue).  The next Research Group meeting will be on Wednesday, 10 January 2012, in the Conference Room at the Chula Vista Civic Center Branch Library (365 F Street).
Posted by Randy at 12:44 PM No comments:

...
The November 2011 issue of the Chula Vista Genealogical Society Newsletter is available online at http://www.rootsweb.ancestry.com/~cacvgs2/Newsletters/11_11nov.pdf.

The Table of Contents for this issue includes: