Here are some photographs from the program, with CVGS members showing off their heirlooms.

First up is Gary B. with his Grandma's cookie jar: 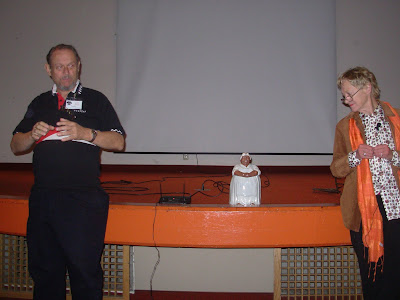 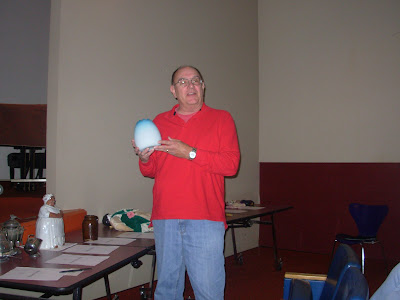 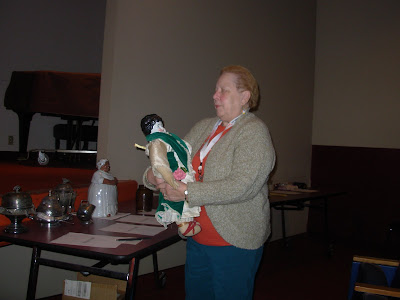 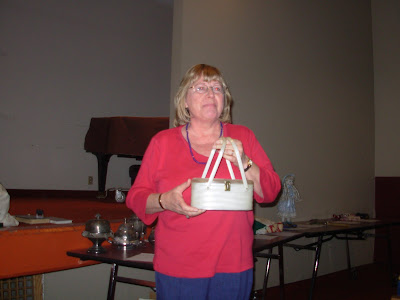 Susan W. and her Dutch or German doll from the early 1800s: 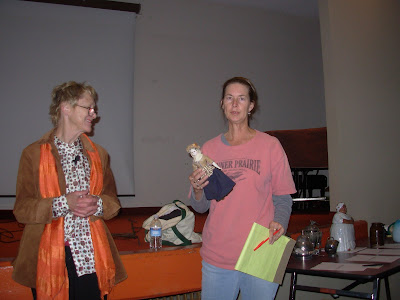 The most enjoyed and anticipated Chula Vista Genealogical Society meeting of the year is the November meeting when we have member sharing. For four of the past five years, we have had Georgie Stillman, ASA, a professional appraiser of artifacts and ephemera, review and evaluate items brought in by the members to share. Georgie is an expert in appraising silver, china, glassware, furniture, artworks, quilts and samplers, many dolls and other collectibles. We call this program an "Heirloom Discovery Day."

On Wednesday, 25 November, we had about 30 people at our meeting, and Georgie worked her "magic" on us once again. For each item, the member shared what they thought the article was, and the provenance of the article. Then Georgie told the member and the audience about the article's origin, materials, manufacture, marks, probable customer status, and an approximate value. We had eleven CVGS members bring their articles for discussion and appraisal, including:

* Nancy S. presented four silver plate pieces from the Stein Farm collection (in National City). Georgie dated them from the 1850 to 1890 period and said there would be museum interest in the pieces.

* Gary B. showed his large family ceramic cookie jar from grandma's house, which looked like an Aunt Jemima article but wasn't. Georgie said it was probably from the 1940s but wasn't a consumer item - it was fairly rare.

* Joan L. brought her grandmother's home-made little brown glazed pottery salt holder. Georgie loved the feel of it, and thought that it was made by a local potter.

* Barbara I. submitted a beautiful medium sized dressed doll with a porcelain head. Georgie said that it was machine-made, probably from the 1940s.

* John F. presented a beautiful robin's egg blue Victorian glass vase with a serrated opening, which was a gift to his great-grandmother from her brother. Georgie said that it was hand-blown, probably English and made in the 1880s.

* Virginia T. showed off her mother's doll in a farmer's wife dress. Georgie said that the molded head was probably made in Germany in the 1890s and sold separately, and then the dolls were created locally using the head.

* Wilma P. brought a 1933 Chicago "Century of Progress" World's Fair program and Oneida silver plate spoons. Georgie said it was a collectible and not rare.

* Susan Z. presented her Aunt's plastic purse from the 1950.s. Georgie loved it, said it was made of Bakelite, and was fairly valuable.

* Susi P. had a third generation apron. Georgie said that it was handmade in the late 1800s from commercially available material.

Obviously, I didn't take notes on everything Georgie said about each item - she often talked for 5 to 8 minutes about each item. I tried to take photographs of each presenter and their article with Georgie - and I'll post the ones that come out well in a later post.

Georgie's style is informal, enthusiastic and interesting - she really enjoys seeing these types of artifacts and "stuff" because they are, in the main, from middle-class homes from the Victorian era and later. She is used to appraising high-end items for collectors and estates.

It is fascinating to see an expert appraiser at work - the words seem to flow effortlessly and I am awestruck by the knowledge level. It was a great society program.
Posted by Randy at 10:03 PM No comments:

The program will be Georgie Stillman, a certified ASA appraiser, who will present an "Heirloom Discovery Day."

Georgie will evaluate, provide some historical background and estimate a value of family heirlooms brought in by CVGS members. Her expertise is in evaluating and appraising silver, China, glass ware, furniture, artworks,quilts and samplers.

Georgie Stillman (http://georgiestillman.com/bio.htm) has worked as a professional appraiser in London, England, Phoenix, AZ and San Diego since 1971. She served as president of the American Society of Appraisers (ASA), vice president of the San Diego chapter, and was founding director of the International Society of Appraisers. She has received numerous awards for her outstanding service, including Appraiser of the Year. Besides being a professional instructor at various colleges, she has made many radio/TV guest appearances and written articles for many publications, teaching audiences about antiques and art.


Please enter the auditorium through the Conference Room door on the east library hallway - and pick up the program, buy a drawing ticket for Family Tree Maker 2010, and have a snack before the program begins at around 12:20 p.m.

For more information, please contact Barbara Ibaibarriaga at 619-427-4110 or email baribai@cox.net.
Posted by Randy at 7:53 PM No comments:

The list of new and/or updated genealogy databases for October includes:

1) New or Updated Databases at www.NewEnglandAncestors.org ($$)

2) New or Updated Databases at www.Footnote.com ($$)

3) New or Updated Databases at www.WorldVitalRecords.com ($$)

4) New or Updated Databases at www.Ancestry.com ($$)

These databases are available for FREE at http://pilot.familysearch.org/ - the LDS site for volunteer-indexed and browsable databases -- recently added or completed projects:

Genealogy Blogs You Should Read...

Here is the list of genealogy blogs that were listed in the November 2009 CVGS Newsletter:

o Ruth Himan’s Genealogy is Ruthless Without Me blog – http://genealogyisruthlesswithoutme.blogspot.com/

Randy opened the session by noting that Family Tree Magazine has changed their cover design, and that the latest issue has a free CDROM of Family Tree Builder 4.0 software. He also noted that Ancestry.com is a publicly traded company and wondered if anybody owns stock in it yet.

* We were happy to have Martha back with us after her surgery. She has been accepted as a member of the Flannery Clan in Ireland and has the colorful certificates to prove it. More importantly, she has corresponded with a researcher in Ireland that has taken the Flannery line back to 1800 - it added several more generations to her line. Martha wanted to know how to access only Ireland databases on Ancestry.com - we told her to select "Irish Collections" in the New Search box.

* David has done no new research, but has noticed lots more Member Connect activity on Ancestry.com. Some of his research is being attached by other researchers.

* Dick sent a pedigree chart and family group sheets to two sibling cousins requesting help with family information. One sent it back filled out, the other is working on it. Dick has all of his genealogy data in Ancestry Member Trees, but downloads it occasionally to make reports and charts.

* Virginia went to Indiana last month to visit her sister and do research. She looked for her cousin's papers in a local museum - they aren't there yet. She did find a family reunion photograph from 1928 with about 50 people in it - all named on a separate sheet of paper.

* Ruth brought her six generation ancestors chart and talked about the one who was put in a well by his father. She met a new cousin and they are sharing lots of information, including about Elizabeth Jane, a child that was adopted out and was lost to her cousin's family. Ruth knows all about her! She wants to write books for Christmas and is thinking about doing a website.

* Gary has had some success with Ancestry.com "leaves" while doing Web Searches in FTM 2010 on his Roff family. He's now expanding his search to New England for his Roff surname line. He's working on a new project, which he'll unveil at the November meeting.

* John had a nasty computer virus that cost him two weeks of effort, but he recovered his files and email. He noted that some Ancestry.com family trees have bad information - so be careful what you bring into your online tree.

* Randy shared a San Francisco Funeral Home record, and his search through San Francisco Chronicle newspapers and city directories for ancestral death dates, occupations and residences. He also talked about his Y-DNA results through SMGF and GeneTree, and finding two other Seaver researchers with close matches.

The next CVGS Research Group will be at 12 noon on Wednesday, 9 December, in the Chula Vista Civic Center Branch Library Conference Room.
Posted by Randy at 12:47 PM No comments:

The November 2009 issue of the Chula Vista Genealogical Society Newsletter is available on the CVGS website - this issue is here.

You can read past issues on the Newsletter page.

The Genealogy Cafe is open again...

Avid readers (thank you!) and followers (all five of you?) probably noted that there haven't been any posts of the Chula Vista Genealogy Cafe since 2 November. Believe me, I tried!

Our favorite blog host, Blogger, somehow thought that the Cafe was a spam blog, meaning that we re-publish blog posts from other sites without attribution. As a consequence, they put the blog in "blogger limbo" until they could check it out. It disappeared sometime between 3 November and 9 November when I tried to post something. I complained through the official Blogger Help system (it does work, but sometimes slowly) and was notified on 14 November that it was being returned to "Blogger heaven" and it was on 16 November.

Thinking about the possible reasons that it could be considered a spam blog, I realized that I have been publishing some posts on this blog and also on my personal genealogy blog, http://www.geneamusings.com/, for quite awhile. I may stop posting the complete CVGS meeting material on my personal blog and see what happens. Or, I'll just change the text enough that it won't be a complete copy of what I post here.

Anyway, we're back, and I will post material shortly!
Posted by Randy at 6:27 PM No comments:

...
The Chula Vista Genealogical Society events for November 2009 include:

PLEASE NOTE THE DATE CHANGE for the Research Group meeting - the library will be closed on 11 November for Veterans Day.

** Wednesday, November 18, 12 noon to 2 pm, Chula Vista Civic Center Branch Library (365 F Street) -- CVGS Computer Group meets in the Library Computer Lab. We will visit some helpful genealogy web sites. This is an opportunity for those members who haven't used computers for genealogy research to practice with a mentor to guide them.

** Monday mornings (11 a.m. to 1 PM) - November 2, 9, 16, 23, and 30 - Genealogy Table Talk with Dearl Glenn and John Finch in the Family Research section of the Chula Vista Civic Center Library. They are ready and willing to help people with their research, discuss a problem or success, or just tell stories.

The Chula Vista Civic Center Library is located at 365 "F" Street in Chula Vista - between Third Avenue and Fourth Avenue, midway between I-5 and I-805 (take the "E" Street exit from the freeways).