Dear Genea-Man: What do those markings mean? 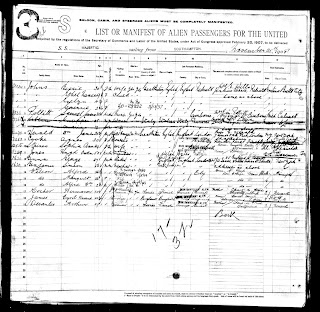 ANSWER: Genea-Man is not very experienced with passenger lists and naturalization records, but he has a very informative book on the subject.
Looking at the book "They Became Americans: Finding Naturalization Records and Ethnic Origins" there is a section on page 161 about Certificates of Arrival. It says:
"Probably the most common reentry annotations are related to an immigrant's first step toward naturalization. Verifying that all petitioners for naturalization were legally admitted immigrants was one of the reforms instituted by the Basic Naturalization Act of 1906. Smith further notes that
" 'under the 1906 statute, the naturalization procedure required a step whereby the Bureau of Immigration and Naturalization checked ship manifests to verify the legal admission of every applicant for citizenship who had Declarations of Intention or Petitions to a naturalization court. On these forms, the immigrant named the port, date and ship of his or her arrival. Copies of the form were forwarded to the appropriate ports of entry to be checked by verification clerks who located the immigrants arrival record among their immigration manifests. If the record was found, INS issued a Certificate of Arrival and sent it back to the naturalization court.'
"Between 1906 and 1924, the certificate of arrival was a critical identifying factor connecting the immigrant to the port of arrival. Beginning 1 July 1924, the INS began collecting immigrant visas, which subsequently became the official arrival records. One could not be admitted without an immigrant visa, and only a permanent admission could be used to issue a Certificate of Arrival, which would support a naturalization. According to INS historian Smith, an immigrant visa leads to permanent admission, which leads to a certificate of arrival, which leads to naturalization. The alien's immigrant visa file then became the first place to search for proof of legal entry into the United States."
The above was obtained from
Loretta Dennis Szucs, "They Became Americans: Finding Naturalization Records and Ethnic Origins," Ancestry Inc., 1998, page 161.
The passenger list image was obtained from
Manifest, S.S. Majestic, 25 November 1908, page 11, line 16, for Alfred Wm. Wilson (age 2), digital image, New York Passenger Lists, 1820-1957 [database on-line]. Provo, UT, USA: The Generations Network, Inc., 2006. Original data: Year: 1908; Microfilm serial: T715; Microfilm roll: T715_1174; Image 11, Line: 16 (http://www.ancestry.com/, accessed 5 December 2007).
Consequently, I think that there is an excellent chance that Alfred Wm. Wilson's Certificate of Arrival was number 7-185009, and that it was signed on 24 October 1941. There is probably a naturalization record for him (and his parents) in a court house someplace near where he lived in the 1940's.
This is a good lesson for all of us who haven't done much immigration and naturalization research. I learned something! I'm going to use this as a show and tell at the next CVGS Research Group meeting.
Posted by Randy at 2:59 PM